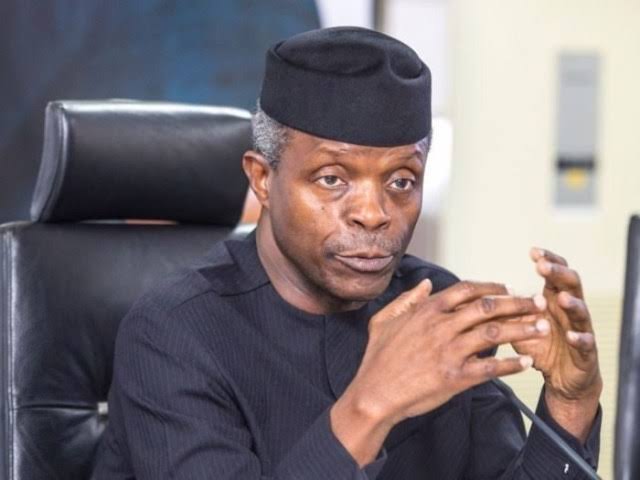 Vice-President Yemi Osinbajo on Friday faulted the decision of the Central Bank of Nigeria to prohibit deposit money banks, non-banking institutions and other financial institutions from facilitating trading and dealings in cryptocurrency.

Osinbajo said the monetary authorities should rethink their stand on the issue.

According to a statement by his Senior Special Assistant on Media and Publicity, Laolu Akande, the Vice-President stated this in his keynote address delivered virtually at an economic summit organised by the CBN, the Banker’s Committee, and the Vanguard Newspaper with the theme ‘Bankers’ Initiative for Economic Growth.’

Akande’s statement was titled ‘VP calls for cryptocurrency regulation: We must act with knowledge, not fear – Osinbajo.’

The CBN had earlier this month ordered banks and other financial institutions to close all cryptocurrency accounts with immediate effect.

The CBN Governor, Godwin Emefiele, had on Tuesday said the ban was in the best interest of Nigerian depositors and the country’s financial system.

Describing the operations of cryptocurrencies as dangerous and opaque, Emefiele told a joint Senate Committee on Banking, Insurance and Other Financial Institutions; ICT and Cybercrime; and Capital Market, that the use of cryptocurrency contravened an existing law.

But Osinbajo, who chairs the nation’s Economic Sustainability Committee, said while he fully appreciated the position of the regulatory bodies about possible abuses of cryptocurrencies, their position should be subjected to further reflection.

He said the CBN, the Securities and Exchange Commission and others should come up with a thoughtful and knowledge-based regulatory regime that addresses the concerns “without killing the goose that might lay the golden eggs.”

Osinbajo was quoted as saying, “There is a role for regulation here. And it is in the place of both our monetary authorities and SEC to provide a robust regulatory regime that addresses these serious concerns without killing the goose that might lay the golden eggs.

“So, it should be thoughtful and knowledge-based regulation, not prohibition. The point I am making is that some of the exciting developments we see call for prudence and care in adopting them, but we must act with knowledge and not fear.”

Osinbajo called on the monetary authorities to rethink their stand on cryptocurrencies.

‌
He said, “There is no question that blockchain technology generally and cryptocurrencies, in particular, will in the coming years challenge traditional banking, including reserve (central) banking, in ways that we cannot yet imagine. So, we need to be prepared for that seismic shift. And it may come sooner than later.

“Already, remittance systems are being challenged. Blockchain technology will provide far cheaper options to the kind of fees being paid today for cross-border transfers.”

Osinbajo added, “I am sure you are all aware of the challenge that the traditional SWIFT system is facing from new systems like Ripple, which is based on the blockchain distributed ledger technology with its own crypto tokens.

“There are, of course, a whole range of digital assets spawned daily from blockchain technology. Decentralised finance, using smart contracts to create financial instruments, in place of central financial intermediaries such as banks or brokerages is set to challenge traditional finance.

“The likes of Nexo finance offer instant loans using cryptocurrency as collateral. Some reserve banks are investigating issuing their own digital currencies.”