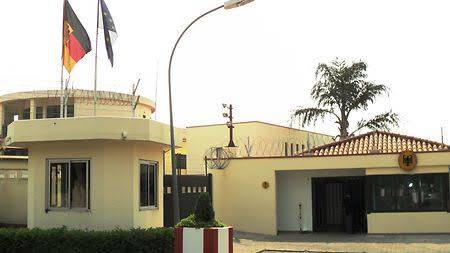 Some Nigerian applying for master’s academic programmes in Germany have allegedly accused the German Consulate in Nigeria of refusing to offer them visa appointments after paying an exorbitant amount of money.

They alleged that they have been experiencing this for three consecutive academic sessions, adding that the German government has been giving excuses for its action.

They lamented the huge amount of money spent in filing applications and how their efforts were futile.

A report by one of the applicants on behalf of the affected persons said, “For three successive academic sessions, forthcoming Nigerian master’s students admitted to study courses in Germany have not been welcome to the embassy for an interview (they were not denied visa). The explanation given by the consulate that the visa appointment was fully booked out was simply communicating ineptitude.”

The victims bemoaned the time and money invested in pursuing academic programmes in Germany which have borne no positive results.

One of the affected applicants told SaharaReporters that “a student offers his time typically months (30 days +) applying to various schools up to 3, 4, or more, composing and editing applications, motivation letters, responding to questions like motivation behind why they pick their course and the school, sending mails with the courier at practically N30,000 (DHL which I use regularly) per mail, pay Uniassist (admission body) 75 euros (N25,000 depending on fluctuating exchange rate) per application. Pay school for an application and again enrolment fees (e.g. TUM).

“And finally selected amongst other international competing students for admission. We make it look easy; however, it isn’t. Most of us are self-sponsored with brilliant determination. What’s more, the consulate would not give a competent reason why they would prefer not to meet with this student for an interview.

“Most of the students have already transferred 10,000 euros (N5.5 million, compulsory fee) to German blocked accounts since last year. A lot of them are no longer interested in travelling, the sponsor is demanding a refund since they were not interviewed and some need the money back so they can reapply to school elsewhere, since last year.

“Now, it is not possible to get these funds because a visa refusal letter is a required document to get the funds back. Now the embassy could not interview the students, keeping our studies on hold.”

They, however, enumerated necessary things that the German consulate should offer them to end their predicament.

“We need transparency from the consulate, we need information we can work with, not aimlessly applying without a yes or no whether we would get an appointment like ‘summer applications are limited, try winter’ or ‘If you do not have a scholarship letter or a first-class, do not apply.’ It helps scale them a number of applicants, making the screening process less stressful.”

He further explained that, “Education is a priority, and it is clearly stated on the embassy website.

“If a student, having invested his time and funds going through the long application procedure. What’s more, the school acknowledges, in the wake of putting him/her higher than other international contending students, the consulate ought to hear him/her out (interview), and ascertain if he/she meets the models for migrating to Germany.

“Presently, there is a major distinction between denying a visa and not being welcomed for an interview.  The former being refusal of student visa after interview means that the student doesn’t meet the necessary models for migrating which is an acknowledged system used by all consulates, while the latter, that is not being welcomed for an interview on the basis of having a large influx of application is an instance of the consulate not being competent to handle student visa processing. It is reasonable if a student is being denied a visa than an interview appointment.

“If the applications are many, they can opt for third party assistance. India uses VFS global. And they travel with ease for their studies. Irrespective of the number of students, we already pay. Up to N30,000 for visa handling, it should be able to cater for the extra aid. Assuming they get a gigantic number of utilisations, we might want to know.

“April and October being an already established date for school resumption, the embassy if being handled by a competent head, should opt for temporary expansion of the workforce during these peak periods. The embassy should anticipate beforehand the huge influx of students and make adjustments towards expanding their workforce. Students already pay a visa fee up to N30,000. Ideally, it ought to cater for the additional guide they would require.

“If there are restrictions placed on Nigerian students travelling to Germany probably based on previous performance of other Nigerians or for general reasons, the embassy should communicate with us, we find it reasonable to attempt other countries than waiting for an opportunity that would not come.”