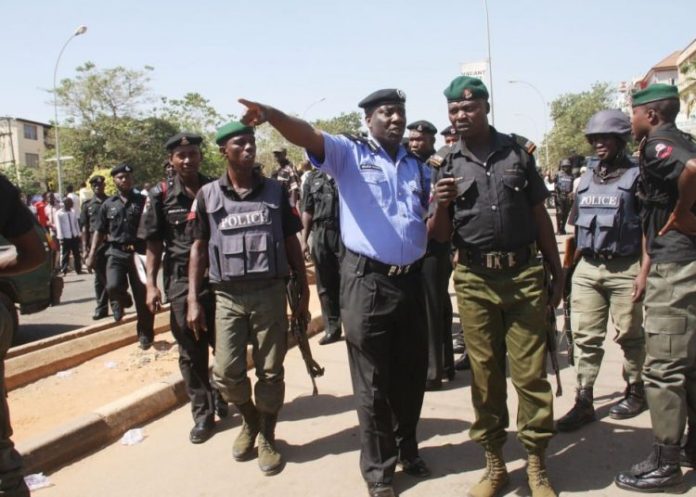 The kingpin, Stephen Clement and four others including his girlfriend who is the alleged amourer to his gang has been on the police wanted list for series of robbery and other crime related offences.

Assistant Inspector-General of Police (AIG), in charge of FCID Annex Alagbon Close, Mr Usman Belel, who paraded the suspects at the weekend, said the gang , comprising: Ndego Cyril,33, Stephen Clement,33,Amaechi Ani, 32 , Osatin Omorogieva,25, Joy Omowumi,42 and others on the run has been on police watch list for over a period of time.

AIG Belel, said the suspects were arrested in the course of investigation carried out within Lagos and and Edo State,” they have confessed to series of armed robbery and search warrants were executed at their houses and premises where double barrel shotgun, four cartridges and four vehicles suspected to have been snatched from their victims were recovered.

We are making efforts to seeing that other suspects on the run will be arrested and made to face the law”.

However, the suspected female amourer, Omowumi, told our Correspondent that,” actually, Clement Stephen is my boyfriend. I can’t deny him, he has been living with me for four years, but what baffles me is that he was keeping arms and ammunition in my room without my knowledge.

I am a sweeper and after early morning road sweeping ,I would resume at my kiosk where I sell provision. I did not know that my living-in-lover was keeping weapon in my room. I helped the police to arrest him.
“He was not at home when the police came, but I called him on phone and told him to come back home and help me to kill a snake that entered the house and he ran home. That was how he was arrested. I regret ever habouring him”.

The Police however, said Omowumi was telling cork and bull story as it was not possible for her not to see the gun where it was consciously kept in the room.

The prime suspect, Clement said it may be possible that Omowumi knew about the gun,: I kept the gun. It was bought for me by my master. We use it to be snatching cars. Each car we snatched, I would take to him and he would pay me. I am happy that he is also arrested”.