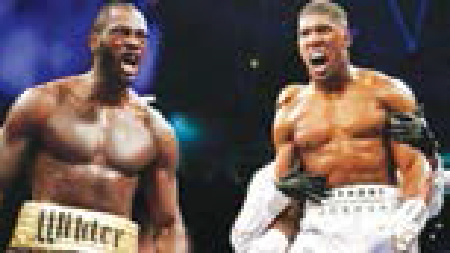 Joshua’s promoter Eddie Hearn has been in talks with Wilder’s manager Shelly Finkel and indicated an end-of-year blockbuster could be possible.

It came after he talked down Joshua – who lost to Oleksandr Usyk last time out – returning straight into a super-fight with his American rival, who knocked out Robert Helenius, 38, last October.

It leaves Price, who once knocked out Joshua in 2011 when the 33-year-old was an amateur champion, backing Wilder to win.

He told iD Boxing, “I’d have to say Wilder. I just think he’s less emotionally damaged especially after his win over Robert Helenius, it was back to normal for him, back to business.

“Whereas Joshua is more of a thinker and puts more pressure on himself to perform. He’s a perfectionist and it’s a terrible trait for a sportsman.

“You can say you’re a perfectionist and that’s good but when nothing less than perfect satisfies you, that’s when it becomes a problem that you’re never satisfied and you’re never happy with your performance.

“Wilder’s almost raw still, he doesn’t care how it looks, it’s about getting the job done and I think that will tell in the fight.

“He will let his hands go more and be less tentative and that will be what wins the fight.”

Joshua is expected to return in April against a top-15 rated contender before eyeing a summer rematch with Dillian Whyte, 34, who he beat in 2015.

It would set Joshua up for a mega-fight against Wilder to see the year out, something retired Price would love to happen.

He said, “I’d build back up, one more defeat could be a disaster for him. The Dillian Whyte fight makes sense… then he can look at fighting maybe Fury, Wilder, there are loads of good fights out there.”