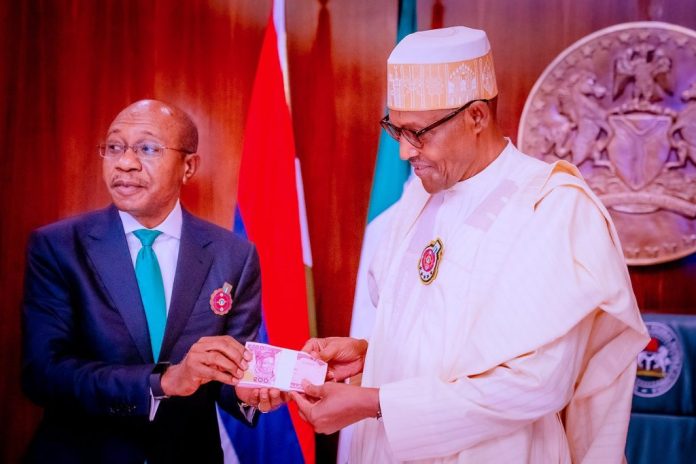 The President, Major General Muhammadu Buhari (retd.), on Wednesday, said the naira notes are long overdue for a change as the current tender has been in circulation for nearly 20 years.
This was as he said the newly redesigned notes have unique security features that make them difficult to counterfeit.Buhari said this when he launched the new Naira banknotes at the council chamber of the State House, Abuja, shortly before the kick-off of this week’s Federal Executive Council meeting.

According to a statement signed by Buhari’s Special Adviser on Media and Publicity, Femi Adesina, Buhari also expressed delight that the redesigned currencies were locally produced by the Nigerian Security Printing and Minting PLC.

The statement is titled ‘Why I approved the redesign of Naira notes, by President Buhari at the launch of ₦‎200, ₦‎500, ₦‎1000 banknotes.’

Speaking at the launch of the new banknotes, the President noted that international best practice requires central banks and national authorities to issue new or redesigned currency notes every five to eight years.

He lamented that it is almost 20 years since the last major redesign of the country’s local currency was done.

‘‘This implies that the Naira is long overdue to wear a new look.

‘‘A cycle of banknote redesign is generally aimed at achieving specific objectives, including but not limited to: improving the security of banknotes, mitigating counterfeiting, preserving the collective national heritage, controlling currency in circulation, and reducing the overall cost of currency management,” he said.

He added that “the new Naira banknotes have been fortified with security features that make them difficult to counterfeit.’’

Explaining why he approved the redesign, the President said there is an urgent need to control the amount of currency in circulation.

The President said while it may not be apparent to many Nigerians, only four out of the 54 African countries print their currencies in their countries, and Nigeria is one.
“That is why it is with immense pride that I announce to you that these redesigned currencies are locally produced right here in Nigeria by our Security Printing and Minting PLC,’’ he said.He added that the new banknotes would help the Central Bank design and implement better monetary policy objectives as well as enrich the collective memory of Nigeria’s heritage.