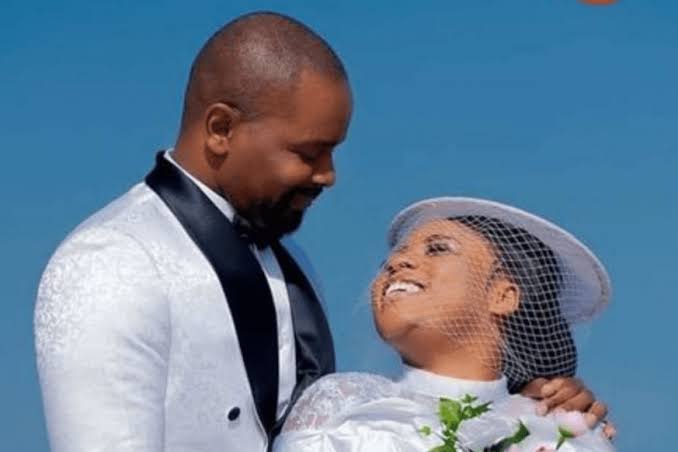 Chioma Jasmine Okafor, the daughter of popular Nollywood comic actor, Mr Ibu has announced that her 9-month-old marriage has hit the rocks after she discovered that her husband was previously married and had three kids.
The couple who met on the popular social media platform, TikTok, got married legally on February 28, 2022 after dating for two months.

Announcing the marriage crash on her official Instagram page on Monday, she said a foundation that was built on lies won’t stand, adding that despite all the love she had for her husband, he never found it fit to inform her about his previous marriage and kids.

“This was the best 9 months of my life! I have no regrets whatsoever! I just won’t settle for a lie regardless! I forgive easily, I remember asking you about this severally before we started! Finding out today from your mum, really broke me! A foundation built upon a tiny lie won’t stand! I love how you loved me! But hate how you never mentioned your divorce nor kids to me! Moving on I don’t think I want anybody else! Just gonna love you from a distance”

Speaking about her nine months marriage, Jasmine described it as a beautiful one in which she was worshipped by her partner, but felt let down by her husband’s decision to hide his previous marriage and kids from her, adding that she has already filed for divorce.

“My marriage was so beautiful and full of love. My husband literally worshipped me. I don’t know if anyone is ever going to love me like he did. But this one lie, I can’t forgive. I have filed for a divorce today. I found out today that he has three grown-up girls. 3! Never told me he was married and divorced. Yes, he is divorced but still doesn’t change anything. I married a single loving husband. I won’t settle for less. I love him so much. I appreciate all the love you show me. You showed me a different version of love. I appreciate it but I can’t settle for a tiny lie. I can’t forget, and I won’t forgive. I don’t owe anyone an explanation.”

She added that she would have still married her husband if he had informed her about his previous marriage and kids from the onset, saying it is impossible to trust him ever again now she has found out herself.