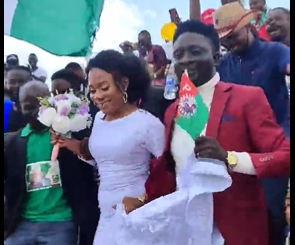 Supporters of the Labour Party who trooped on Saturday to show solidarity for the presidential ambition of former Anambra State Governor, Peter Obi, watched in disbelief as a newly-married couple joined their rally.
Grinning from ear to ear, the groom and bridegroom were warmly received as many people struggled to shake and hug them.

The groom, Adamson Desmond, known on Twitter as ‘Oyibo4comedy’ is a video content creator based in Abuja.

The viral video clip, which was shared via Obi’s official handle, has generated reactions on social media.

An elated Desmond, who was dressed in wine suit and white sneakers, was seen holding his wife during the solidarity march in the company of other ‘Obidient’ supporters.

While praising the couple for the show of love, Obi wished them a successful marriage that would equally produce united children.

Obi’s tweet read, “Salute and congratulations to this newly-wedded couple in Abuja, whose special day coincided with the Obidient Family March in Abuja; and they marched too!

“Wishing you both a blissful and happy married life and children, who will grow up in a united, secure and productive Nigeria.”

A certain N.Chidi disclosed that “It shall end in praises. Congratulations the Obidient couple.”

Kolawole Amaka, who was also impressed with the sight of the couple screamed, “Abuja people hail una. You guys are too much.”