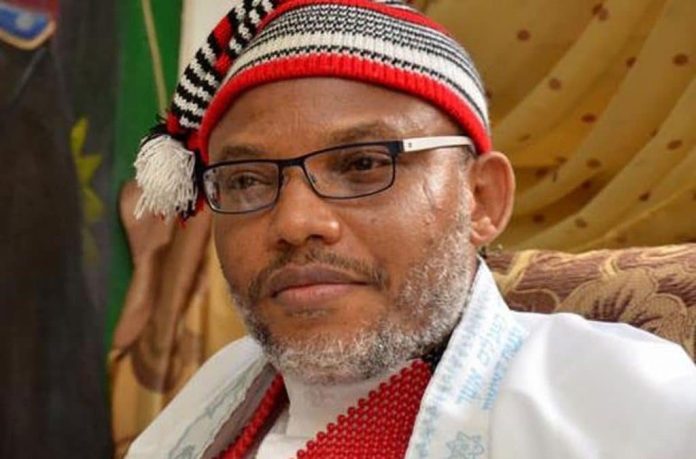 Traditional rulers in Abia State, have said they would lead a high powered delegation to President Muhamnadu Buhari for ‘a royal truce’ over the continued detention of the Leader of the Indigenous People of Biafra, IPOB, Mazi Nnamdi Kanu. The royal fathers disclosed this Thursday evening when they visited Kanu’s family at their Isiama Afaraukwu community in Umuahia North Local Government Area.

They expressed worry over his reported failing health, and said they would have audience with the President as soon as he returns from the United Nations General Assembly trip to seek solution to Kanu’s plight.

The monarchs noted that Kanu’s late father, HRM Eze Israel Kanu, was one of them, hence there was no way they could abandon the family in their trying moment.

He expressed optimism that the President would heed the wise counsel of the Royal Fathers and consider political solution for Kanu in the overall interest of the country.

Eze Ofoegbu who said that the monarchs also used the visit to solidarise with the Kanu family, strongly condemned the September 14, 2017 military invasion of Kanu’s compound, describing it as a desecration of the royal stool.

He said that it would be unfair for the IPOB Leader “who is fighting against injustice and the deliberate exclusion of Ndigbo from the scheme of things” to be termed a terrorist “while real mass murderers are being pampered by the same Government persecuting a freedom fighter”.

The royal father urged Ndigbo not to abandon Kanu who he said, had sacrificed so much for their survival and freedom.

He added that while Kanu’s legal team continued to explore the legal avenues for his freedom, there was need to also seek political solution to end the stand-off.

On Kanu’s deteriorating health condition, the royal father advised the Federal Government not to allow any harm befall him in custody as the country might not be able to handle the after effect of such ugly scenario.

He promised that the family would apply the various “reasonable suggestions” they  offered during the closed door meeting.

Prince Emmanuel who regretted that efforts by the family to secure a private physician for Kanu was frustrated by the DSS, sought the intervention of the international community.

” I have made numerous efforts to get him a private physician but each time I try my best, they ( DSS), turn it down. He is going through very difficult times. He is complaining bitterly about his health. He has big issue with his stomach.

“This is the time for the world to come in and say something about that because if he dies there, it is not going to be easy for anyone.

” So, what I’m asking people to  do from today is to make sure they sustain the pressure to allow Mazi Nnamdi Kanu travel overseas for medical treatment.”

He, however, expressed disappointment over the non-committal of the South East political elite in the efforts to free Kanu.

” The political elite are not doing enough; I see them as part of the problem and not the solution. They don’t have the balls to stand up and make case for Mazi Nnamdi Kanu.

” They even find it difficult to visit him. Apart from Gov. Chukwuma Soludo of Anambra State, no other Governor from South East has visited him in detention.”

Speaking with newsmen also, member representing Aba South state constituency in the Abia State House of Assembly, Hon. Obinna Ichita who has been part of the peace initiate between the Federal Government and the Kanus, said political solution remained the only way to solve the Kanu/ FG debacle.

Ichita who said he had been privately engaging top senior federal officials over Kanu, expressed optimism that the intervention by the traditional institution would be fruitful.

The lawmaker who said that releasing Kanu would help douse mounting tension in the South East, urged the Federal Government to quickly consider the clamour for political solution over the lingering face-off.

They expressed deep worry over the reported failing health of Kanu and begged the Federal Government to give him a special consideration as a prince, and in honour of his late parents.

Highlight of the event was a visit by the monarchs to the grave site of Kanu’s late parents inside his father’s palace.