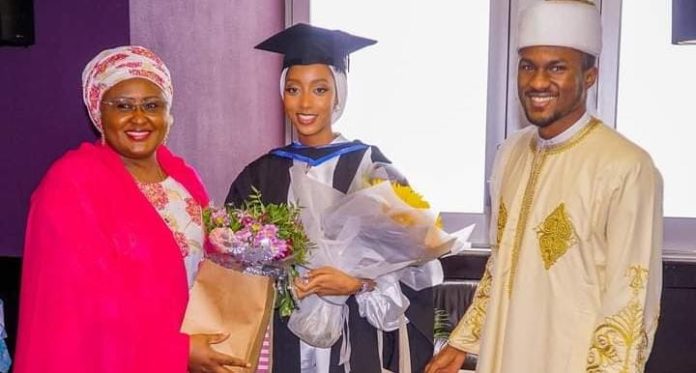 Some civil society groups, on Tuesday, described as “insensitive” a post made by the wife of the President, Aisha Buhari, on her Facebook page celebrating her daughter-in-law’s graduation from a United Kingdom university.
They also urged Mrs Buhari to apologise to millions of Nigerian students stuck at home as the seven-month strike by the Academic Staff Union of Universities lingers.

Mrs Buhari had posted a picture of herself, her son, Yusuf, and his wife, Zahra, with a caption, “Congratulations to Mrs Zahra B. Buhari on your graduation with First Class Honors in Architectural Science. Wishing you all the best.”

Nigerians, however, criticised her for the update.

In an interview with our correspondent on Tuesday, the spokesperson of the Southern Kaduna Peoples Union, Luka Binniyat, described the post as ill-timed and called on youths to demand an apology from Mrs Buhari.

He said, “The action of the First Lady portrays the kind of arrogance, insensitivity and lack of respect for the teeming Nigerian youths, especially university students who are under severe frustration, because her husband has refused to do the needful.

“But she came out clearly to sneer at the other Nigeria youths by saying ‘we don’t care what you’re going through. Look, our children are already doing well, you can as well stay for decades at home. It will not affect our children.’ She symbolises many other top functionaries of this government who have their children in similar schools.

“What the First Lady did is not only an assault on the sensibility of Nigerians. It is also an insult to the collective well-being of the future of our children. So, all well-meaning people should protest and ask that she give a full apology and that her husband must be forced to take the right actions to return children to school.”

On his part, the Executive Director of Adopt A Goal Initiative, Mr Ariyo-Dare Atoye, told The PUNCH that such behaviour should be discouraged.

Atoye said, “Nigerians do not only deserve a public apology from the first lady or the first family. But such an attitude should be resoundingly condemned.

“This should be an eye opener ahead of the 2023 elections, that we must elect leaders who will demonstrate in practical terms or who have demonstrated in practical terms, that they are committed to Nigeria and the Nigerian goal because what we’ve seen done by this first family is not just appalling.

“It is shameful. For millions of students to be at home without education, and the first family to come out to celebrate the graduation of their member outside the shores of Nigeria is quite embarrassing.”

This is not the first time the First Lady will be drawing the ire of Nigerians over her social media updates.

Recall that Mrs Buhari, in September 2020, came under fire after pictures of her daughter’s wedding surfaced on the internet.
PUNCH