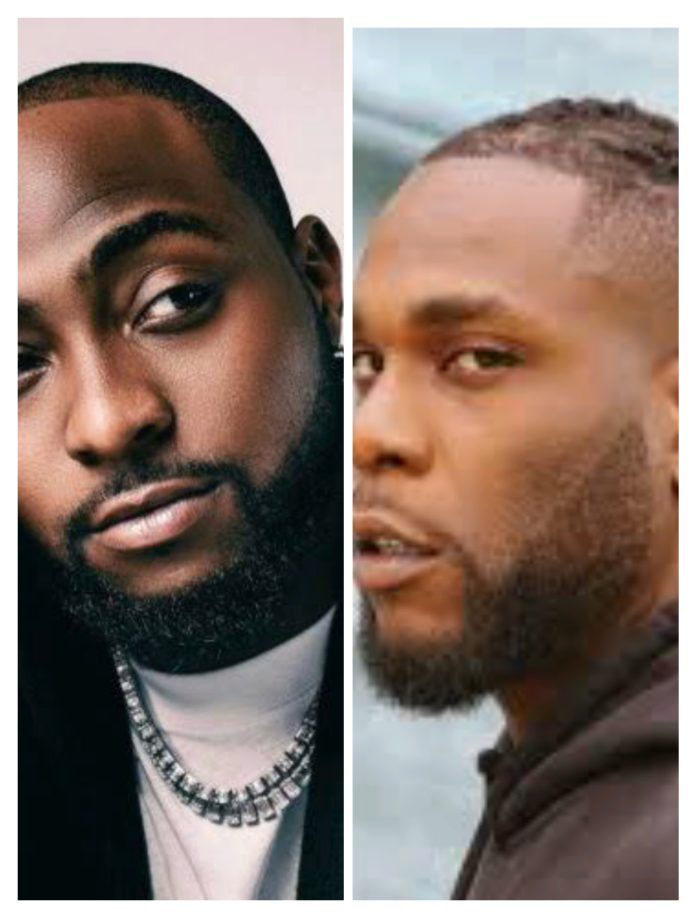 Burna Boy’s beef with Davido allegedly began in the autumn of 2019, when Burna Boy was nominated for a Grammy award for Best World Music Album for ‘African Giant’. After the award, where Burna Boy lost out to Beninese singer Angelique Kidjo, Odogwu became quiet on social media for a while, leading many fearing he took his defeat badly.
His return to the online world was marked by a now-deleted reply to a Twitter user who claimed Burna Boy had his success handed to him by the likes of Davido and Wizkid; an allegation that angered him.Burna Boy hit back at the Twitter user, saying that no one paved the way for him and subtly fired shots at his peers; claiming no one in his industry cared. Many Twitter users actually agreed with him, insisting that he was a trailblazer in his own right, even though there was no clarification on who Burna Boy was directing his tweets at specifically.

However, clues as to who Burna was referring to, began to surface after Davido announced the release of his album in July, 2020. Burna Boy wasted no time in entering into Davido, as days later, he posted a black screen with the message, “JULY will be very funny, and I shall laugh accordingly” on social media, suggesting to his fans that he will be ridiculing Davido’s new album.

After the post, Davido not wanting to be seen as backing out, tweeted an edited photo of him and fellow Nigerian singer Wizkid, captioned “The 2 greatest of all time! No cap”

In response, Burna Boy questioned Davido’s success in a song, by claiming that he owes his achievements to his billionaire father. The song although did not mention Davido by name, but had its message passed

Fans believed that Burna Boy’s song ‘Way Too Big’ from his August 2020 album ‘Twice as Tall’ was directed at Davido with the lyrics, “I’m way too big to be f***ing with you”. Diss tracks and subtle messages are common in the music world when there is beef , such as the feud between Stormzy and Wiley.

In his track ‘FEM’ which is Yoruba slang for ‘shut up’, Davido addresses Burna Boy directly in the line, “Then Odogwu says we like to party just call me…” – ‘Odogwu’ and ‘Like to Party’ are both names of a Burna Boy song.

The two took their beef further by engaging in a fight in a club in Ghana, in the early days of 2021.

According to an eyewitness, Burna Boy came to the club and charged at Davido. The African Giant was later asked to leave the premises with his boys.

Both have however settled their beef in the eye of the public but a sort of disquiet hangs upon them.