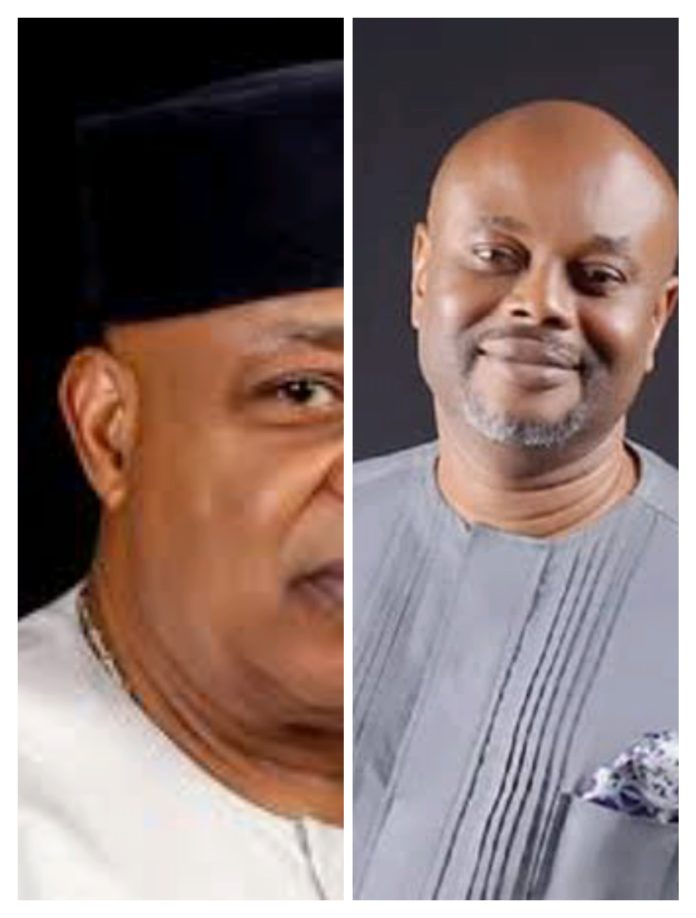 For specific reasons, the All Progressive Congress, APC, has not known peace in Enugu from day one.
Personal interests have been an overriding factor breeding unending crises which has become a major characteristic of the party in the state.
As should be expected, the ruling PDP in the state capitalized on the in-flighting to further destabilize the party ensuring that no reasonable opposition existed.
For a fact, APC has not really contested any major election in the State since it’s formation in February 6, 2013.
Efforts of the former Chairman Dr. Ben Nwoye cannot, however, be wished away but he couldn’t do it all alone.
The former Chairman Ben Nwoye faced the same crisis and battled until his exit few months ago.
All his efforts, especially at the early stage of the party were frustrated from the same “party leaders” who have always had a different agenda from the major objective of a politcial party, which is contesting and winning elections.
Like his prediccessor, the current State party Chairman Barr. Ugochukwu Agballa has shown signs of seriousness and commitmemt towards participating actively in the 2023 elections.
He has actually started a tour of all the wards in the state alongside the guber candidate.
This is novel in the party in Enugu.
Ugo Agballa’s emergence as party Chairman, as expected was a tough fight. The different factions in the party were out to stop him, but he finally had his way.
It’s therefore not surprising that the heat is starting again; and there is a call to sack the Chairman, few days to commencement of campaigns.
A collection of Ken Nnamani, Geoffery Onyeama, Minister, and Sullivan Chime, the same leaders who cannot win elections in their wards at the weekend declared that Enugu is not ready for election. They also insist that the Chairman Agballa must go.
*Why Agballa must go
Arising from a stakeholders meeting on Sunday in Enugu, the party chieftains reiterated their resolve to institute a caretaker committee to oversee the activities of the party leading to the elections.
The party according to Ken Nnamani doesn’t seem attractive to prospective members due to Agballah’s leadership style.

That the party chairman had neglected party stalwarts and was through his conducts leading the party to a disastrous end.

“We feel the party is not going the way it should go. There is danger ahead as people are leaving our party.

“For only one person to contest our party’s gubernatorial primaries shows we are not attractive and most of our flag bearers are those most unlikely to win elections.’

Also, former State governor, Barr. Sullivan Chime, described Agballa as an impostor bent on destroying the party in the State.

Chime said that he never supported the candidacy of Agballah as party chairman due to his antecedents.

*They are after Tinubu’s money-Guber candidate
The Enugu guber candidate Uche Nnaji on Sunday noted that the issue in Enugu is all about the Tinubu campaign funds.
He recalled that four years ago the same thing played out, leading to Ken Nnamani collecting the fund in the midst of the crisis.
The former Senate President was then accused of hijacking campaign funds meant for Enugu State.
They alleged that the current effort is to create a similar atmosphere of crisis so that Nnamani would position himself to collect the money again.
*Nnaji’s proposed solution/the search for real APC stakeholders
The guber candidate Uche Nnaji has a solution to the problem. And has promised to go to Tinubu and the National Secretriat of the party to withhold Enugu’s share of the Tinubu money.
For him, it’s time for action. Time to deliver at the grassroots. Time to know those on ground. The real stakeholders.
He argues that if Ken Nnamani and his group are sincere about delivering the party in the state, “Let all stakeholders source for money to run the campaigns.
According to the candidate, the results of the election and the bills incurred will be placed side by side for refund by the party. “We don’t want Tinubu’s money. We will collect ours after the elections.”
Conclusion:
Bookmakers tend to agree with the suggestions that Tinubu’s money should not be brought to Enugu.
Even when it is clear that must of those leading the present crisis have no politcial value, and can’t deliver their wards, there is need to test their resolve and genuineness.
Those who have been referred to as ‘PDP at night’ have a point to prove now.
If it’s not about money, the world would soon find out and the party may identify the true stakeholders and those who have always worked against the interest of the party.