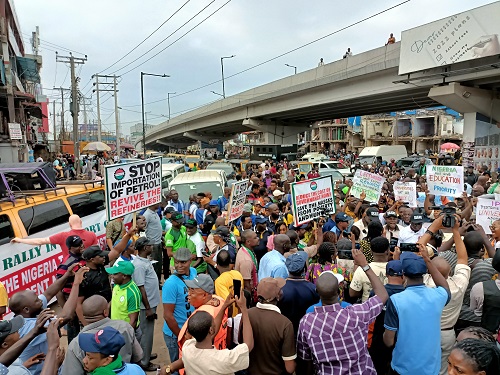 The Nigeria Labour Congress, NLC, yesterday began a two-day nationwide protest against failure of the Federal Government to resolve the strike embarked upon by unions in the nation’s university system, warning the government not to toy with another people’s uprising comparable to the  2020 #EndSARS protest. The strike has lasted five months so far.

The Congress gave the warning through the chairperson of Lagos State chapter of the union, Mrs Funmi Agnes Sessy, during the solidarity rally organised in support of the Academic Staff Union of Universities, ASUU and other unions in the university system yesterday.

“As parents and critical stakeholders in the sector, we are tired of seeing our children and students idling away at home for over five months now. Education is a vital sector that must not be toyed with and handled with levity. It is unfortunate that our leaders who benefited from free, quality education in their days are now the ones killing the sector.

“The ladder they used in climbing to the top, they have removed and thrown away. President Buhari used to be part of protests like this when he was an opposition leader; we are disappointed that a lot of things they promised us are not done. The naira is on a free fall, the standard of living is on the decline and we won’t just sit idly by and allow the future of our children and wards destroyed.

“We are calling on the government to quickly resolve the ongoing strike in our tertiary institutions. Colleges of education, polytechnics and universities have been shut for months; in which sane clime do they allow that to happen? After this protest, if nothing is done within the time-frame given the minister by the President, then the nation is going to witness a people’s uprising bigger than what we all saw during #EndSARS protest. Enough of our children being turned into criminal elements,” she said.

Also speaking at the rally which took off from Under Bridge in Ikeja to Alausa, a Senior Advocate of Nigeria, Mr Femi Falana, expressed disappointment that those in authority now, who he described as his age group, appeared to be keen on killing the education sector in the country.

He recalled the good old days that students in tertiary institutions fed on 50 kobo per day, with quality meals.

Falana, who asked Nigerians not to buy the claim of paucity of funds being peddled by the government, said: “It is not true that the government has no money to fund education and other critical sectors. At the beginning of the year, the government said it would spend N443 billion on fuel subsidy, but now it has increased to N6.5 trillion.

He called on the President to stop globe-trotting and hold criminal elements who have milked the country dry tight and recover public funds in their possession.

“I commend the Nigeria Labour Congress for bringing out all workers today (yesterday) to protest against the insensitivity of our junketing president. As we are here now, he is on his way to Liberia to deliver a speech.

“The President is tired, he has said he is eager to go back to Katsina. We are asking him to rush back home,” he said.

Addressing the people, the Lagos Zonal Chairman of ASUU, Dr Adelaja Odukoya, lamented that Nigerian lecturers are the least paid in the world, and also decried the fallen standard of education in Nigeria as a result of incessant strike.

“A professor in Nigeria earns N460,000 monthly after tax; that is bad and shameful. We cannot continue like this. Our universities are no longer attractive and competitive. We are tired of being at home and strike is the last option for us.

“We have an irresponsible and uncaring government.  The government that cares about its people must invest in education, especially university education. This protest is for the struggle for the soul of this country,” he said.