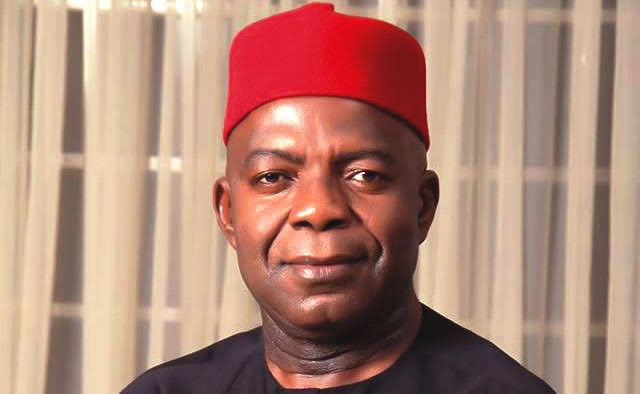 This is sequel to his withdrawn from the 2023 Abia APC governorship primary election slated to hold in few days.

Otti who decamped to APC from APGA, in a statement signed by his Special Adviser, Ferdinand Ekeoma, cited imposition from the APC in the state, which is against the party constitution.

In the withdrawal statement, Otti also hinted at joining another political party to pursue his governorship ambition in 2023.

He said the decision was made after due consultations with stakeholders and army of his supporters.

He however, said having contested the Abia guber election he will never back down until Abians enjoy good governance.

Read the full statement below: “Sequel to the memo from the National Legal Adviser to the Chairman of the APC dated May 18, 2022 which imposed a strange sharing formular on APC aspirants in Abia state, more than 90% of the aspirants, leaders and stakeholders of the party opposed the decision and subsequently appealed to the leadership of the APC to allow an open contest that would give room for the emergence of popular candidates who would also enjoy the support of party members and the electorate during the general election.

“Unfortunately, the party stuck to its decision to go by way of imposition of aspirants. I hereby make the following declarations:

“That the constitution of the party and the electoral act have no room for coercion and imposition of candidates, hence the wise provision for either Direct Primaries, Indirect Primaries, or Consensus as acceptable modes of electing candidates.

“That while the rest of the aspirants had agreed to rally round and support any aspirant that wins the governorship primaries through a free and fair contest, a particular aspirant who obviously believes that he doesn’t stand a chance in a proper contest, rather chose to align with outside forces to be imposed on the party.

“But because we know that any product of imposition for the governorship ticket in the APC at a time like this in Abia would stand little chance in the general election, we strongly opposed it.

“That it’s my firm belief that anyone who wants to govern Abia state and Abians, must be someone who has been democratically chosen by the people, and not one imposed by undemocratic or external forces pursuing self serving agenda that would undermine the welfare and wellbeing of Abians at the long run.

“That because I know that no true revolution has ever taken place without hitches and hiccups, my dogged determination and avowed commitment to ensuring the dawn of a new era of progressive and people oriented leadership has rather been emboldened than dampened.

“That because we are on a voyage of Abia redemption, and because the leadership calamity that befell Abia since the return of democracy in 1999 has not abated, we do not intend to quit midway, as that would represent a tragedy of immense proportion for our people who have been on a long search for good governance that would give them a well deserved reprieve.

“That in the light of the above stated facts, I hereby withdraw from the predetermined governorship primaries of the All Progressives Congress slated to take place in the next few days.

“This well thought out decision was taken after due consultation with the army of our supporters, stakeholders, and above all, respected leaders of the APC within and outside Abia state.

“Finally, we wish to inform our teeming supporters and well wishers that, having been roundly blessed and equipped by God, there’s no cause for alarm over this development, as we are more than ever resolved to pursue our ambition on another platform, and would give it our best to ensure we convincingly and legitimately win the mandate of our people come 2023.