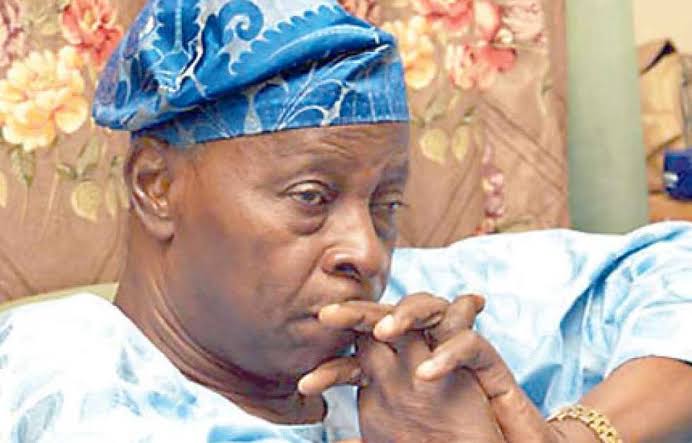 Chief Olu Falae, a former Secretary to the Government of the Federation, served as Minister of Finance in 1990, and contested as a presidential candidate in 1999. In this interview he speaks about politics in Nigeria, among others.

Hear him:
As you can see, political activities have resumed both at the national and the state levels, and some of the gladiators have been coming to see you and seek your support. What has been your response to them?

I have told each of them that I retired from partisan politics in February 2019 and that there’s no way I’m going to go back into partisan involvement. I drew their attention to the crisis in Nigeria, and I asked them, “If you become the President, where will you start? How will you address this existential threat to the cooperative existence of Nigeria?” We call it a security challenge. That is the most unacceptable euphemism I’ve ever heard. It is not a security challenge; we are at war – this is war when you start buying Cobra Helicopters that Americans invented for war purposes. So we are at war; we’ve been using a euphemism to deceive ourselves.

We didn’t call terrorists, terrorists; we call them bandits as if that will take the edge off the evil they are doing. So, we are in a state of an undeclared civil war ravaging the northern part of Nigeria. So, where do you want to start? A train was going to Kaduna; for the first time in our history, the train was bombed, passengers were killed, and about a hundred others were kidnapped and taken to the forest. What shocked me was that the Kaduna State governor said, “We know where the terrorists are; we know who they are.” If those two statements are true, then the inevitable question is – why are they still there? Why are they not all dead? If we have a government in Nigeria, then it is supposed to guarantee the security, the lives, the well-being, and the security of the citizens. They started negotiating with terrorists, and those ones are asking for the release of their leaders so that they can go back and do more havoc. This isn’t very pleasant. It’s obscene. I don’t want to get worked up because I’m now of advanced age. Still, these things have made me be on the quiet side because what needs to be done is clear, and from what we read and what we hear, the government seems not to have the wherewithal (money) to do what needs to be done. They have Tucano Aircraft, Cobra Helicopters, and other military equipment. Why are they not using them to wage this war and end it?

When this government came seven years ago, I think one of the reasons people voted for Buhari was because he was a former Army General; as a former military person, he would deal with Boko Haram and give Nigeria peace in no time at all. Immediately he took over; he made some noises like moving the headquarters of the anti-terrorist team to Maiduguri. We said that was a military approach.

For seven years now, matters have gone from bad to worse, so if this trend continues, when will it end? And without security, without rest of mind and peace, nothing else can happen. Even your physical survival can’t continue if you are not safe. If you can’t do your business, if you are a trader that can’t procure whatever you sell from one part of Nigeria that is now at war, your existence is under threat even in your home. So without security, nothing else is possible.

When military people seize the government and seek international recognition, the first criterion that the United Nations and other agencies will look for is, are they able to guarantee peace and security of life and property in the country they have just seized? And if the answer is to be yes, I can assure you that is a 50% score towards that issue.

Any government that wants to qualify as a government must be able at least to maintain the security of its citizens and their property. If it cannot do so, then it ceases to be a government. It can be anything else but not a government.

Q: You seem to be expressing fear in your comments. What exactly is your fear?

My fear is already here. I fear that we may descend into anarchy. Anarchy is a situation where there is a breakdown of law and order, anywhere, everywhere and every time. In the language of Thomas Hobbes, the political science thinker will call it a state of nature where man is wolf to man. In other words, “every man to himself and God for us all.” If you are stronger than your neighbour, you grab his property, his wife, whatever you want from him, kill him, do whatever you like with him and move on. That is anarchy which we don’t pray to have in Nigeria. But we are already seeing the beginning of such possibility in what has been happening here for the past seven, eight, nine, and ten years. That’s my fear that we should not descend into anarchy. Life has to be cut short because anybody can kill anyone. That is the kind of non-existence that I don’t want Nigeria to be involved in; that’s my fear.

Q: As you have observed the spate of insecurity in the country, many have already been expressing fear and doubt about the possibility of having elections in 2023. What is your view?

I have very serious doubts, great doubt about 2023 becoming a reality. Why? Apart from the general state of war and violence, INEC (Independence National Electoral Commission) made it known about two weeks ago that hundreds of its workers have been killed. Some of its offices, equipment, and vehicles were destroyed and burnt. Suppose a clear year before the election that is already happening to INEC and its personnel. What is going to happen between now and Election Day?

I doubt that any sensible election can occur in 2023 because, as I said earlier, the state of violence has been progressing to the final stage of anarchy. So if that threat continues, I’m afraid elections will not be feasible in 2023, and if that were to happen, what would happen? You cannot hold elections, and the term of office of the present legislators and executive members, their terms of office expire at the federal and state levels. We cannot elect their replacements because of anarchy, confusion, and chaos; Nigeria is in limbo. It will mean that the ‘Lugardian evil’ experiment has come to an end.

Nigeria will no longer exist if a Northerner succeeds Buhari, says Adebanjo