He came, He saw, He commissioned -By Chooks Oko 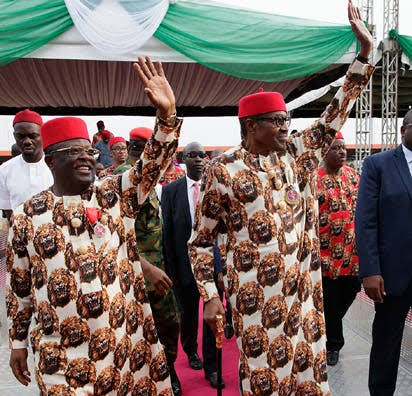 An epochal visit has just been rounded off. The visit of President Muhammadu Buhari to Ebonyi state. A visit that is as memorable as it is impactful. It was a fait accompli for the young state and the apogee of a well laid package fitted neatly to precision.
From Akanu Ibiam airport to Uburu, from the Onueke airport site to the new government house, the visitors marveled at sheer engineering prowess ensconced in the array of courageous projects that certainly took some audacious guts to start, in the first place.
Commissioning the now King David Federal University of Medical Sciences, Uburu, the apparently overawed President enthused that the quality of the project is quite glaring even to a non engineer like himself. Truly, the project is mind blowing! What with a cancer centre, a kidney transplant centre, liver transplant centre, heart transplant centre and above all, a dialyzer production factory, the only such in black Africa. What is more, most of the equipment are already in place while the remaining ones are in the high seas sailing majestically to base. The university is surely a task force against medical trips abroad, a sure precursor to medical tourism boom in the country. Its taken-over by the federal government is a laudable feat both for the governor and the president. The speed, quality and finesse deployed in the execution of the project could have been compromised had it not had a direct supervision from the governor, a federal government contractor could have cut corners possibly rendering a less qualitative project. It is thus a blessing to the nation that it is receiving a bespoke masterpiece.
The Muhammadu Buhari Airport was the next port of call. With its longest and concrete runway almost completed, the airport will host a lot of firsts in the aviation history of the country. The presidential wing was commissioned amid fanfare while the other ongoing structures will ensure the President’s third visit to Ebonyi state, to commission the airport for full business.
The twin flyovers in Ebonyi are legendary studies in user friendly dynamics. They are wide, solid and beautiful, purpose built and futuristic. The president commissioned some to the elation of both the guests and visitors.
At St. Margaret Umahi international market, the president was confronted with one of the largest markets in West Africa with super solid structures and a beevy of grateful traders and buyers. This radiated in their smiles of satisfaction and waves of love, a most touching sight!
Next was the virgin presidential lodge domiciled in the centenary city which the president commissioned and moved in. A mere look at the building will trigger your relaxation senses, moving in will give you dreaming ideas, and lying down activates your rest nerves; the lodge is a befitting stopover for presidents, only. Next to it is the new government house, lodge and Aisha Buhari Wife of the Governor’s office which were all commissioned.
Rest over, the shopping mall, aptly referred to as the”Dubai” of Africa was the next port of call. But the twin light tunnel flyovers named after the president had to be commissioned first. A most alluring sight to behold at night, nothing will suggest to you that you are in the heart of Southern Nigeria. What with the adjoining exquisite shopping mall and the enchanting ecumenical centre all awash with lightings that force a serene ambience on even the most troubled spirit.
The icing on the cake was the new executive council chambers. Modeled after the United Nations meeting chambers, the edifice is a wonder. Big, bold and beautiful, the building stands as one of the most beautiful meeting venues in the country. The president commissioned and commended, it was a satisfying trip for both the visitors and their hosts. Presidential spokesman, Femi Adesina sums up the visit thus ” A splendid outing from a splendid Governor. Seeing is really believing”.

GOVERNOR UGWUANYI’S GIANT STRIDES IN THE JUDICIARY: A GLIMMER OF HOPE

As the President visits Ebonyi – By Chooks Oko