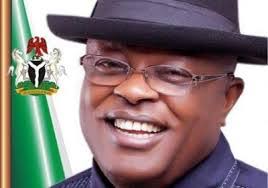 Governor Umahi insisted that Chinese doing mining businesses in the state must adopt modern method of mining to save the people from hazards associated with open mining.

The Governor spoke during the funeral service/internment of Late Ogochukwu Elem the State All Progressives Congress(APC) Youth Leader in Ikwo LGA.

Ogochukwu and his two police escorts died inside one of the mining pits in the state when the vehicle they were travelling in skidded off the road and fell into a deep mining pit by the road side.
The tragedy occurred along Enyigba/FUNAI road in the state.

Governor Umahi who was visibly angry over the activities of Chinese in the state who have continued to use open mining, warned that such was no longer acceptable.

“And when you are pursuing these people, our people collect peanuts and aid them and all these mining these things, the government benefit nothing. We collect little little bribe and allow them in the night”.

“Today, lead and zinc has filled our homes without knowing the implication to our livers, it is very dangerous and that is why we say if we get any house that is ware housing lead and zinc, we will seal the house and revoke the right of occupancy of that house”.

“Lead is very dangerous, it doesn’t digest in the liver and it is because of this we are having a lot of liver failures, kidney failures. It is not known to our people.

He directed the State Commissioner for Solid Mineral to insist on strict compliance to modern method of mining. “This is what is done even in Ghana here”. ENDS.