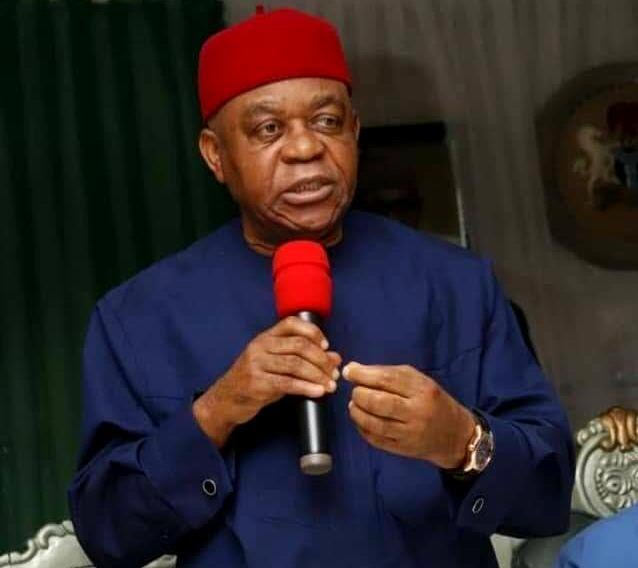 The Coalition of South East Youth Leaders, COSEYL, Thursday, condemned the arrest of a former governor of Abia state, Senator Theodore Ahamefula Orji, at the Abuja airport by the officials of the Economic and Financial Crimes Commission, EFCC.

Orji was intercepted at about 10 am this morning and brought to the headquarters of EFCC at Jabi, Abuja, for continuation of his interrogation.

Explaining the reason for the interception, the commission said Orji was arrested over his refusal to abide by the bail conditions given to him by the agency.

A source confirmed to the newspaper that the former governor refused to return his international passport, which was deposited with the body after he used it to travel to Dubai for medical attention last year.

The source said the former governor also declined to turn him himself for further questioning upon return from the Arab country, thereby forcing the antigraft agency to put him on its watch list.

He has been under investigation over alleged misappropriation of state funds worth 55 billion during his tenure as governor of his state.

Reacting in a statement signed by Hon. Goodluck Egwu Ibem, President General and Comrade Kanice Igwe, Secretary General, the group opined: “The Coalition of South East Youth Leaders, COSEYL, the umbrella body of all the youth organisations in the South East geopolitical zone condemns in strongest terms the interception of a sitting Distinguish Senator of the federal Republic of Nigeria representing Abia Central Senatorial zone at the Senate, Distinguished Senator Theodore Ahamefula Orji at the Nnamdi Azikiwe international Airport Abuja by the Economic and Financial Crimes Commission, EFCC.

“The interception of the highly respected and revered Igbo Senator whose address is known and public knowledge even to the EFCC who should have extended an invitation to him if need be, is a calculated attempt to gag opposition and ridicule Ndigbo before the public as bad people so as to deny them an opportunity of producing a Nigerian President of Igbo Extraction come 2023.

“If Senator Theodore Orji who have made it public that he is retiring from active politics in 2023 will be so embarrassed and intercepted at the Nnamdi Azikiwe International Airport, it means that every other opposition member mainly of the Peoples Democratic Party and other Igbo political office holders are in great danger and will be targeted very soon. Opposition Members and Ndigbo have been marked to be dealt with.

“It has never been heard that a sitting Senator from the North was intercepted at the Airport by the EFCC. They have never been intercepted the way they just did to an Igbo highly respected and revered Senator T. A. Orji. What has Ndigbo done to deserve this kind of ill-treatment in a supposed democratic administration?.

“Senator Theodore Orji is a man that has great respect for constituted authorities and has never declined honouring any invitation extended to him from any government agency on any matter. The interception of this great Igbo Leader at the Airport leaves much to desired.

“It is on record that when Senator Theodore Orji held sway as governor of Abia state from 2007 to 2015, he used the security votes and other funds he received judiciously for the security and well-being of Abia citizens who also testified of his good works . Salaries where paid as at when due and the was infrastructural development during his tenure. Youths, women and men were empowered by his administration. The poverty index was reduced to the bearest minimum via his empowerment programmes.

“The petitions against the Distinguish Senator and his family is just the handiwork of political enemies who are intimidated by his political profile and the love the good people of Abia state have for their former governor.

“We call on all Igbo political leaders, businessmen and women, youths, the Peoples Democratic Party (PDP) and all lovers of democracy to rise up against the current clamp down on the opposition and Ndigbo.

“We therefore demand the immediate release of Senator Theodore Ahamefula Orji, Rt. Hon. Chinedu Orji and Ogbonna who are currently under EFCC custody to continue with their service to the people and humanity”.