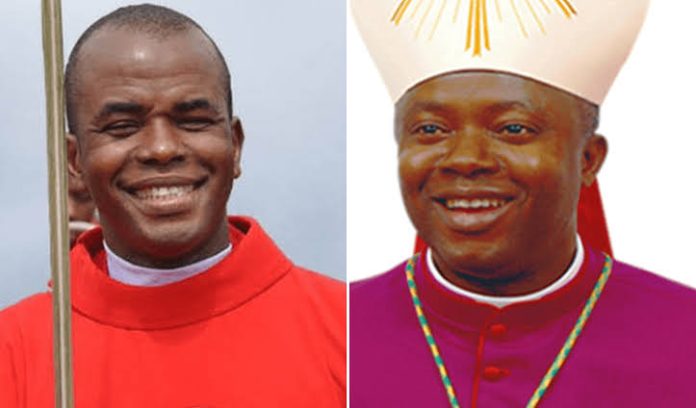 By Chuks.Eke
Enugu Catholic bishop Callistus Onaga has  suspended Rev Fr Ejike Mbaka, closed the Adoration Ministry and allegedly planning to send the fiery priest to Rome, yet he has failed to tell the offence committed by the priest.

His continued silence may exacerbate the entire situation and cause more trouble for the church. You don’t punish one for doing nothing.

With no explanations coming from the Church one may tend to term what is playing out as part of the politics of the Enugu Catholic Church.

The same politics that enthroned the wrong candidate (Onaga) as Bishop, because.the then Governor was his kinsman. Is the Church being punished for that error?

You don’t blame one for embarking on this trip of speculations if the sins of Mbaka had been made public. Again, I ask, what did Mbaka do?

‘Touch not my anointed and do.my prophet no harm,’ are the words of the Holy Book which they should know better.

Is it not a pity that, rather than spiritual upliftment, the church is allowing itself to get into this murdy waters of politics both internally and externally.

Onaga has not also deemed it necessary to face the media and answer vital questions that will help set the records straight.

Such questions include the allegation that one or two governors from the zone are financing and sponsoring this whole ‘gang up’ against Mbaka.

The world also wish to know those who attended the meeting where Mbaka was formerly told to proceed on 30 days suspension; close the Adoration Ministry and leave his house. He is not also to speak during the period of suspension. Who were at the meeting?

How were the decisions arrived at? Was it unilateral by the bishop alone or by the people at the meeting? Was there actually a meeting in the real sense of.the word? Onaga must provide answers to these questions.

People are worried because Onaga as the head of the Catholic Church in Enugu has never commended the efforts of Mbaka both his spiritual lamarks and his charity works which cannot be overestimated.

People are worried because of what would become the faith of thousands of widows, the less privileged, the indigent ones under his care.

What of the thousands of indigent ones on scholarships, those studying abroad and patients whose hospital bills are his responsibility?

Mbaka single handedly built a mighty state-of-the-art Church in his community Amata Ituku, Awgu LGA, to the glory of God.

Yet, part of the bishop’s order is for him to shut down Aqua Rapha and other businesses from where he is doing the work of charity. He is to rely solely on offerings to do charity.

Our bishop who is supposed to support the care for the needy has concluded plans to sack workers in Aqua Rapha and stop the flow of charity that has sustained families. And we ask, what has Mbaka.done?