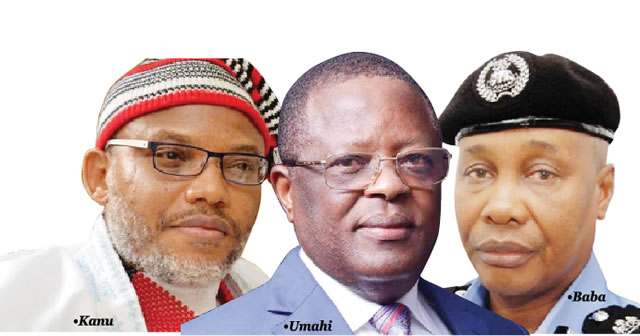 On April 11, 2021, governors of the South-East, after an emergency security meeting at the Imo State Government House, announced the setting up of a regional security outfit codenamed ‘Ebube Agu’ (tiger’s glory). The announcement came in the wake of violent attacks on the Imo State Police Headquarters and the National Correctional Centre, all in Owerri, the state capital.

But the governors’ decision was not only greeted with surprise but also mixed reactions because the people of the region had long awaited the initiative.

Besides, many believed that the Indigenous People of Biafra-which was outlawed by the Federal Government, had taken advantage of the vacuum and the seemingly lacklustre attitude of the South-East governors to float a security outfit for the region, just like their counterparts in the South-West.

The IPOB said the Eastern Security Network was founded to drive away armed herdsmen from forests in the region and find solutions to the nagging insecurity that has made travelling a nightmare, farming near impossible and social activities organised with bated breadths for fear of being attacked.

This was why the six South-West governors met January 9, 2020, and established Amotekun, a regional security outfit.

In spite of the opposition by the Federal Government, the Yoruba stuck to their guns that Amotekun must stay and, thus, the state governments in the region have continued to provide the needed logistics for the security outfit to remain.

Although the South-East had introduced forest guards to protect the forests in the region from being converted to abode for criminals, it wasn’t enough to keep the region safe as the zone continued to suffer attacks, including the killing of Catholic priests, by suspected Fulani herdsmen.

Critics believe the governors of the South-East failed to act when the need arose but chose to hide behind community policing.

While many didn’t support IPOB’s ESN, some saw it as a timely intervention in the absence of a government response to the security challenges ravaging the region.

The governors had last Sunday, shortly after a security meeting, directed the Attorneys-General and Commissioners for Justice of the five South-East states  to work with the joint security committee to come up with the amendment of the existing state laws to reflect the new Ebube Agu security outfit.

The governors, in a communiqué read by the Chairman of the South-East Governors’ Forum and Governor of Ebonyi State, Chief David Umahi, said the security outfit, with its headquarters to be sited in Enugu, the Enugu State capital, would collaborate with the Nigeria Police Force and other security agencies in the region.

“Ebube Agu will work with the Police and other security agencies in her operations to protect lives and property in South-East. The attorneys-general and commissioners for Justice of the South-East states have been directed to work with the joint security committee to come up with the amendment of the existing state laws to reflect the new Ebube Agu outfit,” the communiqué read in part.

But there are those who still see Ebube Agu as one that only exists in name, with no structure, personnel and a law to back it.

There are also concerns about whether the novel outfit will operate together with the ESN without conflict of interest or even clashes that could worsen the security situation in the area.

Already, Ebube Agu has been rejected by the pro-Biafra group, saying the government outfit would be an extension of the conventional security agencies, warning that “one must give way for the other.”

IPOB’s spokesperson, Emma Powerful, described Ebube Agu as an imaginary outfit that won’t work, adding that the governors should not be trusted.

“When our people needed them for protection, they were nowhere to be found. Instead of standing to be counted, they were rather waiting for instructions. And now that their masters have instructed them on what to do, that is why they hurriedly announced the imaginary outfit. We know their mission. The outfit will be an extension of the Nigerian security agencies to spy on our gallant Eastern Security Network and other pro-Biafra groups,” Powerful said

“The so-called Ebube Agu will be infiltrated by thugs and saboteurs to hunt the ESN and IPOB members. They want to fight us using our own people. But we are smarter. We are miles ahead of their game plan. IPOB members and the ESN operatives can’t work side by side with any other group that does not know how we operate. In fact, Ebube Agu is a suspect. We can never operate together or co-exist. One must give way for the other,” he added.

He further said, “We can never trust any outfit formed by our governors for the security and defence of our land. Why are they suddenly realising that a regional security outfit should be set up for the defence of the South-East after foot-dragging for many months? These governors who can sacrifice the collective interest of Ndigbo on the altar of their political future cannot be trusted. They are the worst set of Igbo leaders ever seen. They don’t have the interest of the masses at heart. Why have they been quiet over the atrocities of herdsmen in the South-East all along, if they truly care for the people?”

But political watchers in the region want the two outfits to work together in the interest of the region.

A former governor of Anambra State, Chief Chukwuemeka Ezeife, said, “Well, this cannot be left to any group except the elders now. Those of us who can be called the elders in the whole of the South-East need to work hard, and very hard. We had wanted it long ago, not Ebube Agu but a central regional security system like Eastern Security Network.

“The ESN eventually came because there was no such central system; now that we have a central system, the best thing we can do as elders is to get the governors and IPOB together in whatever way we can do it without offending any group, and work out an arrangement whereby the ESN and Ebube Agu could cohabit.

“The point is really clear; everybody likes the ESN, but you know the ESN is not from an elected government. It is not a people’s movement as such because we voted for the people in government. We didn’t vote for IPOB but we are grateful to them for what they have done to help save our lives. But Ebube Agu, on the contrary, can be said to be a people’s security outfit because it was set up by the government elected by the people.”

While stressing how difficult it would be to forge a unified ground between the governors and IPOB, the elder statesman added, “Ebube Agu, so far, is only a name – no law and nothing on the ground except an existing vigilante. So, I’m thinking the best that can happen is for the government to think deeply; IPOB should listen to the elders and to reasonable suggestions and, somehow, there will be an integration of the ESN and Ebube Agu.”

A former aide-de-camp to the late Chief Odumegwu Ojukwu, Bishop Obi Onubogu, said Ndigbo could not afford to have the two security outfits working at cross-purposes.

Onubogu said a clash of interest between them would leave the Igbo at the losing end.

He said, “We understand that the ESN was formed by a group of people in Igboland. We understand that the same people were agitating, complaining and also desire to have their own nation. It is not a hidden thing; everybody knows about it and it wasn’t done in secret. The issue is this; they got the sympathy of the people and appreciated the situation of the people because there was a vacuum. People have been demanding a proper security network to take care of their security problems in Igboland, such as the harassment of the people in their farms, harassment of women and the young ones with impunity by those who destroyed their farmlands.

“Are these issues not serious enough for the government to intervene? So, it leads to an independent group establishing a security network. They appealed to the people and arrived first. You know we are men of God and we don’t manage our ministry with lies; we tell people the truth. The absolute truth is that there was nothing to defend the people and to protect them. Insecurity was completely all over the land; people were killed, houses were burnt, mothers were raped, daughters were raped and wives were raped.”

Onubogu, who is the General Overseer, Rock Family Church, further said, “So, when a group came to provide this security, the people rejoiced about it, most people, because some people are against it for very obvious reasons. But, suddenly, Ebube Agu, a very captivating name, was announced. But since then, what has happened? We want to see the action. We really want to see them. We don’t want to see, honestly, any war between the two security outfits. We really want to see cooperation so that one group will not be after the other.

“When they are after themselves, then there will be no security for the rest of us. So we don’t want to reach this point because security is important to
the church. Without security,  the church can’t function; so those who give us security are important to us.”

On his part, the Chairman of the Pentecostal Fellowship of Nigeria, Enugu State chapter, Bishop Godwin Madu, said the lapses in the establishment of forest guards by the governors in 2019 would cast doubt on the implementation of Ebube Agu.

“So when I reflect on their actions on previous agreements on protecting our environment and our region, I cast doubt on the reality of Ebube Agu. Now, who will equip this Ebube Agu? From where will the weapons come? Are our governors in the South-East ready to equip them (personnel) with enough and strong weapons that can stand the time and challenge?”

However, the Archbishop of Enugu Province and Bishop of Enugu diocese, Church of Nigeria (Anglican Communion), Most Rev. Emmanuel Chukwuma, who was part of a recent meeting held by the governors, said ESN could be co-opted into Ebube Agu, urging IPOB not to fight the house it belongs to.

Chukwuma explained, “Ebube Agu is an outfit the governors have decided to bring out for the security of the South-East, as you have the Amotekun in the South-West. We shared the same view that IPOB is not a terrorist (organisation) as the Federal Government had labelled them, and could be used to fight insecurity in the South-East. Are they more terrorists than the Fulani herdsmen? So, we don’t see them as terrorists; we see them as agitators.

“So they (IPOB) can be co-opted; that is what the governors agreed. They can be co-opted into the Ebube Agu. When it is legislated now, there will be cooperation between them. We are not going to call them IPOB now; we are going to rebrand them. We are asking IPOB to slow down. ‘Don’t fight the house you belong to but cooperate with the governors; let us work together to make sure that this security problem in our region is addressed’.”

As the events continue to unfold, it has yet to be seen whether IPOB leadership will agree with the governors to allow the ESN and Ebube Agu to work together under certain terms to be stated by the state chief executives.

Stakeholders are however of the opinion that there is crisis ahead of the South-East governors as far as the security of the region is concerned.