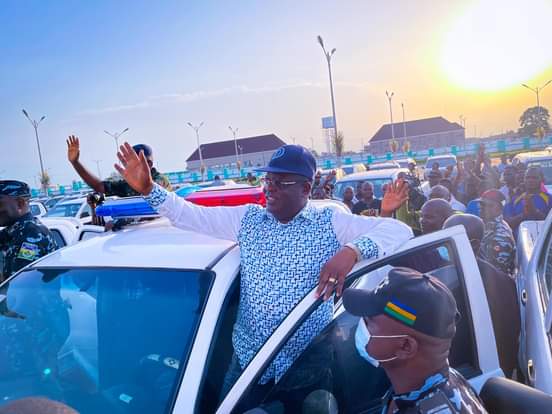 The Ebonyi State Governor, Chief David Umahi yesterday insisted that the newly formed South East Security outfit popularly known as EbubeAgu was not set up against the Eastern Security Network ESN and the Indigenous People of Biafra IPOB.

Governor Umahi who made the assertion at the New Government House Abakaliki while distributing 20 pieces of Toyota Hilux van and 40 pieces of Sienna Bus to the EbubeAgu Security Network noted that the the group will work with security agents in the state to fish out criminals.

The Ebonyi State Governor maintained that on no account should the blood of any Ebonyi man be spilled by hoodlums and killer Herdsmen again adding that he has directed the people of the state to always defend themselves against any aggression.

He directed the 13 Council Chairmen and the Leadership of Christian Association of Nigeria to open talks with the non state actors adding that he is ready and committed to take their demands to the appropriate relevant authorities.

Governor Umahi described as genuine some of the agitation of the non state actors and urged both the federal and different state government to also open talks with them in a view of finding a lasting solution to the numerous security challenges facing the country.

He pointed out that those who carried out an attack in a bank at Onueke in Ezza South Local Government Area were criminals and directed that the perpetrators should be fished out by the security agencies.

Governor Umahi noted that the South East Security Network, EbubeAgu has not been deployed as was reported in the media and assured that the security outfit would be unvealed by the different state of the South East region.

He noted that the outfit will have a uniform clothes and with the same branded vehicle for proper coordination, intelligence gathering and corporation among the 5 South East state. Ends.