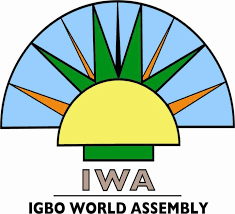 Diaspora Igbo group, the Igbo World Assembly, IWA,  has called for collaboration between the Eastern Security Network (ESN), and the south east governors’ planned  Ebebu Agu, to check the rising cases of insecurity in the region. This is as the group also condemned the Federal Government posture in labelling  the Indigenous People of Biafra, IPOB,  a terrorist organization.

IWA in a statement jointly signed by its Chairman,  Dr. Nwachukwu Anakwenze,  Vice Chairman Christian Onuorah and Secretary General Oliver Nwankor  noted with dismay that government may have  spared  herdsmen that are the real killers, murderers, kidnappers and rapists.

“These Fulani herdsmen terrorists who are the real terrorist are treated with kid’s gloves by the  government while turning around to hound IPOB members who, as far as we are concerned, are not terrorists, but are freedom fighters agitating for a better deal for their people”, IWA noted with dismay.

Expressing discomfort at the worsening security situation in  South East and and Nigeria, the group in the statement  urged  all the towns in all Igbo communities to set up a vigorous and robust vigilantes’ outfit to guard every part of  the state.

“We support civil defense in every part of  Igbo land  in anticipation of nefarious activities in their respective areas of concerns”, the statement added.

Urging  Igbo people to apply old school diplomacy that is deep rooted in synergy  and flexibility, collaboration and , dialogue, IWA  noted that it was time for  diversification of strategies that would allow room for multiple options at all times.

“We should always put our “smartest” men and women that are skilled in diplomacy at the helm of Igbo affairs. These men and women must be ready and willing to genuinely represent Igbo interest at the center, Nigerian and World-wide.

“Because the great Zik and Awo alliance did not work out well in the past, does not mean that the Igbos and the Yorubas  cannot achieve this alliance today.  We need each other for  the Yorubas and Igbos  to survive in our journeys to justice.   In politics there is no permanent enemies or permanent friends, only permanent interests”, IWA explained.

According to IWA, the Igbo extraction need multiple options at all times with one common Igbo Agenda that is tied into One Ohanaeze Ndiigbo perspective.

“We need a Nigeria where measured autonomy and self-determination is front, back and centre. Ohanaeze Ndiigbo should continue with a refocused push for restructuring Nigeria into an independent regional system, allowing freedom fighters, such as IPOB to continue their Biafran struggle in the same fashion that the Oduduwa group is struggling for Oduduwa Republic, independent of other mushroom groups within their struggles”, IWA explained.

Noting that  Igbos need to work with the youths  while avoiding  unnecessary in-fighting, IWA believed that for r the Ohanaeze Ndi-igbo to have enhanced viability and true freedom to broker the  “Igbo agenda”, their funding should come directly from Ndi-igbo from across the globe and not from governments; State, Federal and or otherwise.

“Igbo youths have been taken for granted for years especially, in the underdeveloped and less privileged areas. Coincidentally, future of Ndi-Igbo advancement in terms of Economic, Social, Education, Cultural, innovation and technologies are in their hands.”

“The youths therefore, must be at the center of the proverbial Igbo agenda. Our agenda for youth in turn must start with character education; remolding our youth for future ethical leadership as the workforce and leadership of the future with vocational trade and skills acquisition; the cornerstone for self-sufficiency”, IWA said in the statement.

Making case for  “all points bulletins” approach to economic development in Eastern state  from agriculture, tourism, investments, industries, innovation and technology, the group in the statement noted that a  full-fledged “Think Home Philosophy” that extends to agriculture, food security and sufficiency and Igbo made products such as Aba made, Onitsha made or Nnewi made or Igbo made are the bailout options.

According to the statement, IWA harped on  Igbo culture and language and Arts on a worldwide stage by way of Igbo schools in America and across, as in Diaspora. Notable are the Igbo schools in Atlanta,  Atlanta Igbo schools and PILA Igbo schools designed to achieve this goal, IWA explained