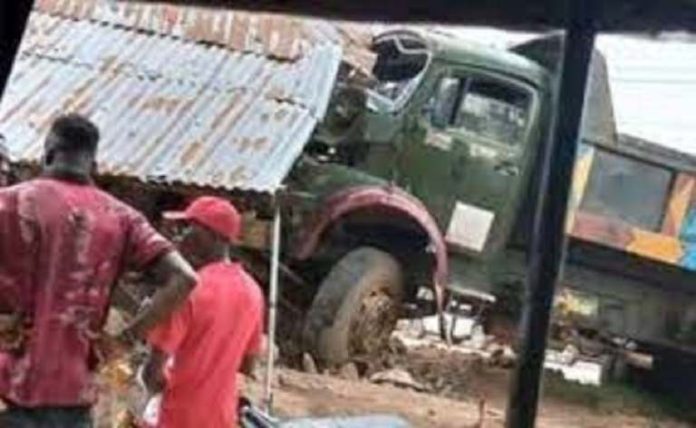 An eyewitness, Martins Igwe, told the News Agency of Nigeria that the incident happened around 1pm at the city centre, known as Cooperative.

NAN reports that revenue agents, allegedly hired by state government contractors, usually chase haulage vehicles at both entry and exit points of Umuahia and Aba for tolls, ranging from N5,000 to N15,000.

Igwe said the incident happened when the deceased allegedly accosted the moving truck, along with four others, but the driver refused to stop.

He added: “In a desperate bid to stop the driver, the man climbed on the vehicle, perhaps to get hold of the steering and force the driver to pull up.

“Suddenly, the man fell off from the vehicle with a heavy bang on the tar.

“It was not clear what made him fall.”

It was learnt that his colleagues immediately rushed and picked him into a mini-bus and took him to the Federal Medical Centre, Umuahia.

He was said to have been “confirmed dead on arrival by a medical doctor on duty at the Accident and Emergency Unit”.

When NAN got to the unit, the deceased’s relations were seen weeping, while his remains were being prepared to be moved to the hospital’s morgue.

A lady, who identified herself as his elder sister, said they hail from Otamkpa in Isuikwuato Local Government Area of the state.

It was learnt that the hospital security alerted the Umuahia Central Police Station to arrest the four men that brought the deceased to the facility.

A senior police officer confirmed the arrest to NAN on the condition of anonymity, saying they were kept in police custody for investigation.