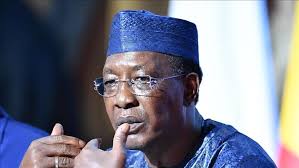 Deby rmdied on Tuesday from injuries he sustained at the war front against some rebels.

He had led a brigade against rebels in the North of the country.

His death is coming after he won his re-election for a 6th term.

A statement he read on state television said Deby “has just breathed his last defending the sovereign nation on the battlefield”.

The late President postponed his victory speech and went to visit Chadian soldiers in the war front.