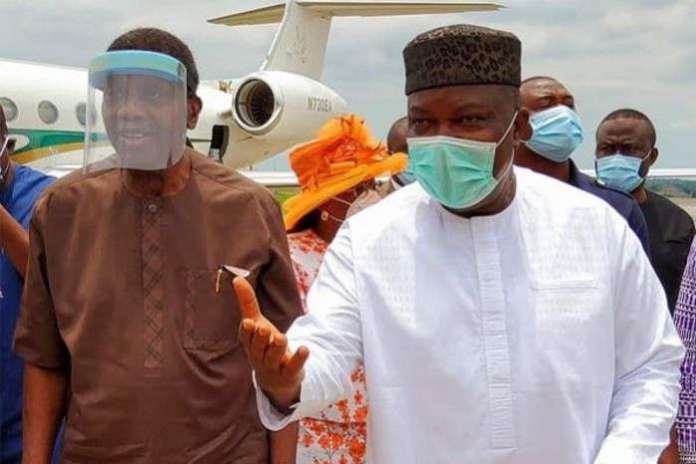 General Overseer of the Redeemed Christian Church of God (RCCG), Pastor Enoch A. Adeboye, has expressed delight at the uncommon leadership qualities of Governor Ifeanyi Ugwuanyi of Enugu State, describing him as a man of kindness and humility.

Speaking on his visit to Enugu State, during the weekend, Pastor Adeboye said that it was a pleasant surprise to him that Gov. Ugwuanyi came to the Akanu Ibiam International Airport, Enugu, to receive him, on arrival.

The RCCG General Overseer was in Enugu for the South East Ministers and Workers’ meeting/crusade of the Church, held at the Nnamdi Azikiwe Stadium, Enugu, on Sunday.

The cleric added that the governor also received him at the Government House, Enugu, and thereafter accompanied him to the venue of the religious event.

“On arriving the Akanu Ibiam Airport of the ancient Coal City of Enugu, it was to my greatest surprise that the Governor, His Excellency Governor Lawrence Ifeanyi Ugwuanyi was there to welcome me.

“To honour his invitation, we headed to the State House (Government House, Enugu) and then to the crusade with my children in the Region, under the Regional Headquarters of RCCG in Enugu State”, Pastor Adeboye said.

Thanking Gov. Ugwuanyi for allowing the Church to use the stadium for the event, free of charge, Pastor Adeboye said: “Due to the kindness of His Excellency (Ugwuanyi) we were allowed to use the Nnamdi Azikwe Stadium for our crusade at no cost and without any special appeal.

“It is my most sincere prayer that the state would continue to experience peace, prosperity and increase in all areas in the name of JESUS (Amen)”.