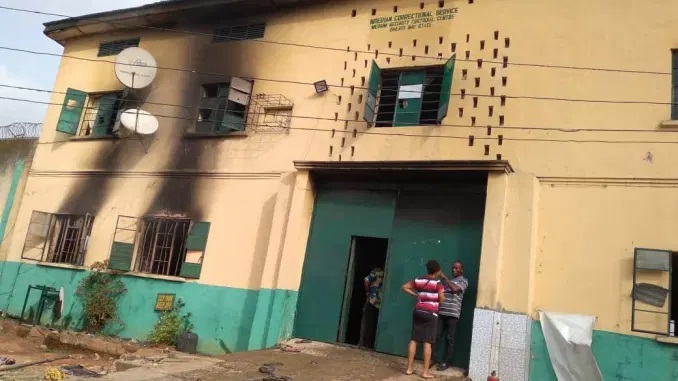 About 125 inmates who escaped from the Owerri custodial centre have voluntarily returned to custody. This is in the wake of the manhunt launched by security agencies for the fugitives who fled the prisons during an attack on the facility by unknown gunmen on April 5.

It was learnt that the Nigerian Correctional Service has been liaising with the Interpol through the Nigeria Police, as well as the Nigerian Immigration Service to re-arrest the inmates.

Over 1,884 awaiting inmates and other dangerous convicts fled the prison during the attack in which several vehicles were torched and buildings vandalised.

About 600 suspects held at the Imo State Police Command headquarters were also released by the gunmen who carried out the attack. The police have kept mum on the status of the investigation into the incident.

But giving an update on Saturday on the efforts to capture the inmates, the NCoS spokesperson, Francis Enobore, a Controller of Corrections, noted that some undisclosed International organisations were reaching out to the service to offer some form of assistance in tracking down the missing inmates.

He explained that some of the returned inmates were brought back by their parents, and family members, saying the fact that their data and picture had been widely published helped in compelling them to return to custody since they knew they could not run forever.

‘’Altogether, we have 125 inmates back in custody as at close of work yesterday (Friday). According to the information I got, most of them are returning by themselves. All their pictures and data have been circulated everywhere, so they know there is no hiding place for them.

‘’Some were brought back by their parents. We have also been reinforcing the message that instead of remaining a fugitive for life, it’s better they come back on their own.’’

The service further said the upgrade of its system enabled it to quickly collate the data and pictures of the inmates, a development Enobore said helped greatly with the manhunt for them, adding that their particulars had also been dispatched to their relations and communities.

Meanwhile, checks by one of our correspondents on Saturday night revealed that the details of the inmates had yet to be uploaded on Interpol’s website.

The Interpol has a section on its website where it lists ‘Wanted Persons’, with the tag ‘Red Notices’, which it said “are issued for fugitives wanted either for prosecution or to serve a sentence.

It added, “A Red Notice is a request to law enforcement worldwide to locate and provisionally arrest a person pending extradition, surrender, or similar legal action.”

Even though it could not be ascertained whether Interpol had taken up the matter, the number of wanted persons from Nigeria remained at the 18 it was the previous week.

On April 10 when the NCoS said Interpol would be contacted, there were a total of 7,606 public Red Notices in circulation, out of which 18 were from Nigeria.