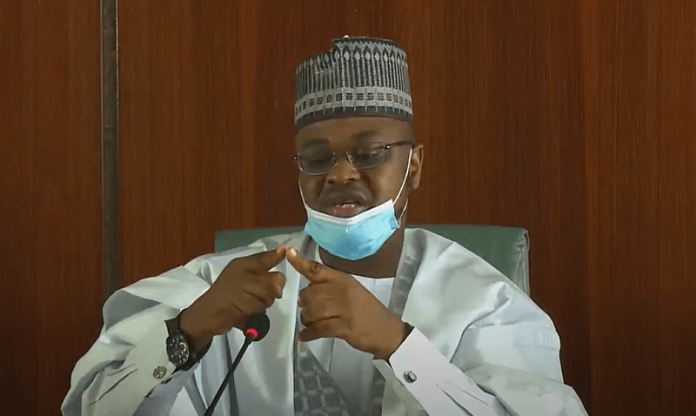 Some Nigerians under a group, Concerned Nigerians, have written to the United States Secretary of State, Antony Blinken, asking that the Minister of Communications and Digital Economy, Dr Isa Pantami, be placed on the terrorists’ watchlist due to his extremist religious views.

The group stated on Friday that the US Secretary of State should order an investigation into the allegations and place him on the terrorist watchlist permanently.

The convener of the group, Deji Adeyanju, who signed the petition, stated that those in power who “express extremist views remain a threat to world peace as they support mass murder of both Christians and Muslims globally.”

he petition, obtained by SaharaReporters, and dated April 11, and written through the Ambassador, US Embassy in Nigeria, is titled, “Terrorist Watchlist – Isa Pantami.”

It partly reads, “We write to intimate you of remarks attributed to Sheikh Isa Pantami, Nigeria’s Communications Minister in several media blogs in the country wherein he was quoted as saying he was always happy whenever unbelievers are killed by terrorist groups. “It is also further alleged that he had in the past openly supported and endorsed global terrorist groups like Al-Qaeda and the Talibans.

“Pantami is said to have praised Osama Bin Laden describing him as a hero and a better Muslim than himself. He has not renounced these views in the face of new revelations by the media. His views are extremist views and a threat to a multi religious nation like Nigeria.

“He is a senior member of President Buhari’s regime and we are of the view that a supporter of Mullah Omar and Osama Bin Laden should not hold a sensitive position and be in charge of the database of Nigerians. We are confident that Mr. Pantami will not resign or be sacked despite the public outcry because President Buhari is drawn to men like him.

“We implore you to investigate these allegations and if true, place him on your terrorist watchlist permanently. Those who express extremist views remain a threat to world peace as they support mass murder of both Christians and Muslims globally. This remains unacceptable.

“Our reply to those who say these men may have had a change of heart is that terrorists don’t repent, they are only looking for an opportunity to get close to power so they can strike harder.”