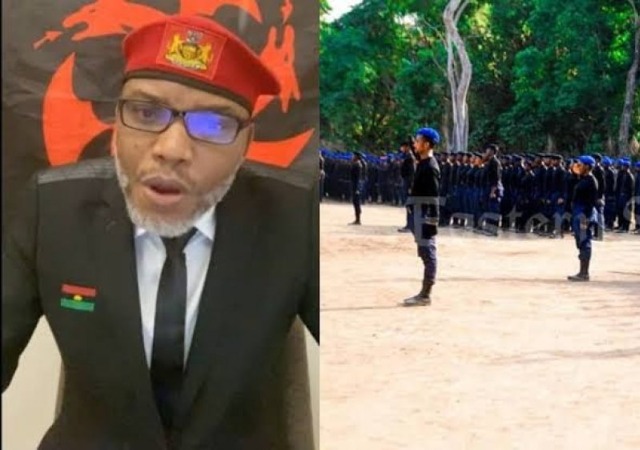 The leader of the Movement for the Actualization of the Sovereign State of Biafra (MASSOB), Chief Ralph Uwazuruike says the Eastern Security Network (ESN) is not a legal security outfit for the southeast region.

This is as he also declared that Nnamdi Kanu, leader of the proscribed Indigenous People of Biafra (IPOB) who set up the ESN has no power to set up such outfits.

Uwazuruike made his view known on Tuesday while speaking during an interview of TVC’s ‘Your View’ programme.

According to him, only Governors from the region had the constitutional powers to set up such outfits and that is why he and his group are embracing the ‘Ebubeagu’ recently set up by the governors.

He also blasted Kanu and ESN, saying the security outfit exists only on social media.

“We have elected, able governors who are entitled to do such function; no individual, no matter who you are, without consultation should open a security outfit for the South-East region.

“So, it is only the Ebubeagu opened and established by the governors that is recognized as the security outfit for the South-East.

The governors at the meeting which was held in Owerri, Imo State capital announced the establishment of EBUBEAGU, which will have its headquarters in Enugu State.

The MASSOB leader however acknowledged that the security situation in the southeast needs attention and he is willing to contribute 5,000 personnel to Ebubeagu.

He Said, “I’m willing to donate 5,000 men and women to work with the South-East governors without interfering,” he said, adding that the South-East Houses of Assembly would soon back up the new security outfit with the instrument of law.”