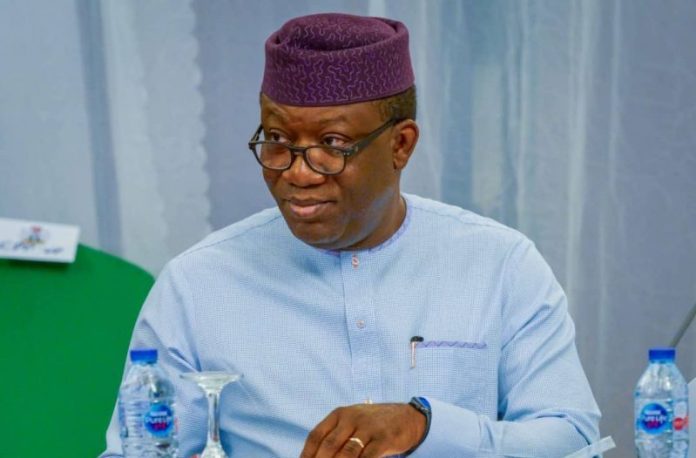 THE reaffirmation by the Governor of Ekiti State, Kayode Fayemi, of the nexus between terrorism, banditry, kidnapping and the general breakdown of law and order across the country should guide the authorities in stamping out insecurity. Fayemi, who doubles as the Chairman of the Nigeria Governors’ Forum, told journalists in Abuja of the “direct correlation” between terrorists and the bloody nationwide crime wave and how the proceeds of kidnapping and banditry fuel insurgency. Thus, armed with sufficient insight into the terrorist adaptability and the Salafist ideology that drives it, the government and security agencies should devise an effective strategy to crush criminality.

In recent years, the number of kidnapping-for-ransom incidents has spiked across the country. The Switzerland-based Centre for Security Studies says Islamist terrorist groups in particular use extorted ransom funds to finance a significant share of their expenses. Al-Qaeda in the Islamic Maghreb is alleged to have collected a total of $89 million in such revenues between 2003 and 2012. Terrorist groups use the ransom funds to recruit new members, to fund the maintenance of training camps, for the procurement of weapons and communications tools, and for organising and executing terrorist attacks.

It is difficult to defeat an enemy you do not understand; the government has for too long demonstrated ignorance of the dynamics of Islamist terrorism since the Boko Haram insurgency began in 2009. Officials also live in denial of the existential danger terrorism in all its iterations poses to the country. They worsen this by unpardonable politicking, allowing primordial considerations to override the imperative of national security. The weakness of internal security has allowed terrorists to mingle with herders to further their jihadist cause, birth offshoots and spread beyond their North-East roots.

In the first half of 2013, the CSS claimed that half of the global kidnapping cases were carried out in just four countries: Nigeria (26 per cent), Mexico (10 per cent), Pakistan (nine per cent), Yemen (seven per cent). According to the Australian government, globally, ransom is paid in 64 per cent of kidnapping cases. But a strict no-ransom policy with the threat of military intervention adopted by many Western countries became a disincentive for terrorists, but made jihadists turn their focus internally.

Fayemi’s insight, spoken after emerging from a meeting with the President, Major General Muhammadu Buhari (retd.), along with recent pronouncements by other senior government figures, offer some hope that finally, the reality has sunk in and the government will respond accordingly with effective and comprehensive strategies against criminality in the country. As he rightly said, the correlation between terrorism in the North-East, banditry in the North-West and kidnapping in the South-West means that “some of the people involved in these are also the ones responsible for insurgency. We must treat them as a comprehensive issue and then tackle them collectively.”

Corroborating Fayemi’s take, Nasir el-Rufai, the governor of Kaduna State, declared, “Kidnapping operations by bandits are substantially funding Boko Haram activities in the North-East.” Intelligence reports also establish that new terror groups, armed with proceeds of kidnapping and robbery and sophisticated weapons, exposed to the toxic ideology of Boko Haram and emboldened by state weakness, have established cells in the North-West and North-Central and collaborating with criminals operating in the South-West. Collectively, this is referred to as “gangster jihadism.”

Nigeria has suffered dearly for the dithering of the federal and state governments. Experience around the world had shown how terrorists align with criminal networks, drug traffickers and money launderers. Warnings of such growing links between Nigeria’s bandits, Fulani herders and terrorists have been coming for years from local and reputable international sources but ignored by officials. A 2017 report by the International Crisis Group, citing Western intelligence sources, reported “a troubling increasingly close collaboration between Boko Haram, Fulani herdsmen and bandits operating in the North-West.” Now, hiding behind unregulated open grazing, this alliance of evil sees the whole country as its operational theatre.

There is no evidence that Nigeria’s security agencies acted on this report, which the ICG said had been shared with them by the US Military’s Africa Command. A Brookings Institution report refers to bandits and killer herders as “thinly disguised terrorists.”

While the Nigerian government was incorrectly labelling Fulani attacks on communities in the North-Central as merely “herders-farmers clashes,” the Global Terrorism Index since 2015 ranked the Fulani marauders as the world’s fourth deadliest terrorist group. The Independent of London credited it with killing 847 persons across five Northern states in 2014 among the total 7,512 deaths in the country arising from terrorism that year. Denial, politics, corruption and sheer incompetence have combined to allow criminality to metastasize and push the country dangerously to the edge of state failure. Alarmed, a former military head of state, Abdulsalami Abubakar, estimates that the “six million illegal arms” circulating in the country fuel unprecedented insecurity.

The moment of truth has arrived rather late, but decisive action can still save the union. For starters, criminality should be recognised as such. The government and security agencies should discard political, ethnic and religious considerations and resolutely stamp out terrorism, banditry, kidnapping, robbery, rape and murder decisively.

Importantly, security agencies should recognise the nature of Islamic terrorism: it may start as a local tumour, but it is global movement based on the Salafist ideology of perpetual jihad; with violence and disruption of existing order as weapons. It knows no national boundaries and its operatives are ingeniously adaptable. A Rand Corporation report found that apart from capitalising on the absence of the state in ungoverned areas, jihadists invariably link up with criminal gangs, smugglers, drug traffickers and underworld networks in shifting alliances. The inevitable alliance between Boko Haram/ISWAP, bandits, kidnappers and AK-47-wielding Fulani militants compels strong law enforcement and stronger political will. A single terror cell, unchecked, can trigger a national crime wave or eventual state failure.

Federal security agencies should stop being part of the irrational offer of amnesty to bandits by some state governors. Jihadists and their collaborators cannot be appeased.

Since reports have established the influx of fighters, arms and ammunition from North, West and Central Africa as well as thousands of displaced herders, the government should tighten border controls and move security and administrative personnel into the ungoverned territories to deprive terrorists and bandits the room to operate.

Instead of threats and hints, the government should uncover the sponsors and financiers of terrorism and banditry; their funding, arms and logistics networks should be disrupted. According to the Financial Action Task Force, “disrupting terrorism-related financial flows and transactions is one of the effective ways to fight terrorism. Not only can it prevent future attacks by disrupting their material support, the footprints of their purchases, withdrawals and other financial transactions can provide valuable information for ongoing investigations.”

This alliance of evil must be broken and destroyed. Unfortunately, in tackling insecurity, the Buhari regime places primordial sentiments over facts as now espoused by Fayemi. This is the reality Nigerians should face at the sub-national level. Governors should therefore be held responsible for the security of lives and property of their people. Without sentiment or partisanship, they should use anti-open grazing legislation to decongest forests and highways of herder jihadists. Open grazing of cattle provides a cover for bandits, terrorists and cross-border criminals to flourish. Local communities, too, have the right to protect themselves lawfully from violence. The governors should initiate community-based or self-protection strategies and support community-led protection efforts.

The 36 state governors should move from their belated acknowledgement of the failure of the existing single policing format, establish security agencies and mobilise for its immediate constitutional redress as a national emergency. Ultimately, the war on terror and banditry will be won by a strong political will to implement root-and-branch reform of Nigeria’s tottering structure.