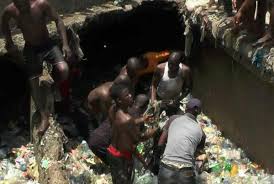 An eighteen seater Hummer bus loaded with passengers was swept inside a culvert at Lagos park axis of Enugu-Onitsha express road following Sunday night downpour, killing seventeen out of eighteen passengers on board, IgbereTV reports.

Eighteen people were in the bus and only two people were found while they were trying to break the culvert filled with debris to pull out others trapped.

One survivor (a woman) was rushed to Toronto hospital, Upper Iweka while rescue operation continued.

Speaking on the incident, the Medical Director of Toronto Hospital, Onitsha, Dr. Emeka Eze, advised drivers to be perceptive to the nature of roads and routes noting that some portions of the road are bad and the environmental condition not conducive during rainy season.