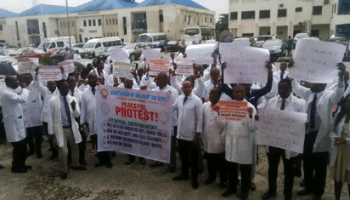 Members of the National Association of Resident Doctors (NARD) have suspended their nationwide industrial action.

This comes 10 days after the doctors commenced the strike, leaving many patients unattended across various government-owned hospitals in the country.

The President of NARD, Dr Uyilawa Okhuaihesuyi, confirmed the suspension of the strike to Channels Television on Saturday in Abuja, the nation’s capital.

He explained that the leadership of the union took the decision to suspend the industrial action after a virtual meeting with members which lasted about 15 hours.

“We have suspended our strike after our meeting which ended about an hour ago,” said Dr Okhuaihesuyi.

Suspended, Not Called Off

Asked to clarify whether the strike was called off or suspended, he responded, “No, we have only suspended.”

He added that a communique to that effect was being put together and would be made available to the media before the end of Saturday.

The medical practitioners suspended the strike barely a day after a meeting between the leadership of the union and the Federal Government.

Dr Chris Ngige, the Minister of Labour and Employment, chaired the meeting which lasted about six hours and was also attended by the Minister of State for Health, Dr Olorunnimbe Mamora.

Briefing reporters on Friday at the end of the meeting, Ngige disclosed that a five-man committee had been set up to look into some of the doctors’ demands.

They included Dr Okhuaihesuyi, the Secretary-General of the Nigerian Medical Association (NMA), and representatives from the ministries of labour and health.

According to the minister, the committee is expected to look at the non-payment of House Officers’ salaries within 72 hours and produce a valid list to the Integrated Payroll and Personnel Information System (IPPIS), through the Federal Ministry of Health.

On the issue of salary shortfall of resident doctors from 2014 to 2016, he said the meeting resolved that NARD and the Committee of Chief Medical Doctors should immediately submit a list of affected institutions and personnel strength, to be captured in the 2021 supplementary budget, with arrears from April 2019 to December 2019, as contained in the Memorandum of Action signed at the meeting.

The meeting, according to Ngige, also discussed the issue of hazard allowance and NARD was asked to come up with a position paper which should be submitted at the meeting of the Presidential Committee on Salaries, the National Salaries, Incomes and Wages Commission, the Nigeria Medical Association, and the Joint Health Sector Union on April 14 at the Federal Ministry of Labour.

Other issues the meeting considered are abolishment of the bench fees, residency training allowance, group life insurance payment and payment of residents on GIFMIS platform.

On his part, Dr Okhuaihesuyi said the association was satisfied with the outcome of the meeting and hinted of positive action on the part of the doctors.

Ngige had urged the doctors to call off the strike latest by 12 noon on Saturday, but the union only suspended it at about 8:09pm.