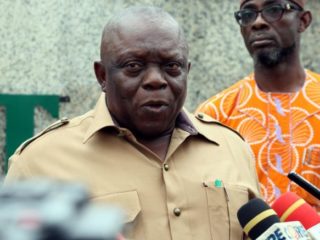 Imo State government has accused a former governor of the state for being the mastermind of Monday’s attacks on some federal facilities in Owerri, the state capital.

Commissioner for Information, Chief Declan Emelumba, yesterday, alleged the former governor engaged thugs whom he had earlier granted amnesty to unleash violence on police and correctional centre to prod the Federal Government to declare a state of emergency in Imo.

Addressing a press conference in Owerri, Emelumba averred that all that took place in the state had the imprimatur of the ex-governor.

He said government was also in possession of information on how a special adviser to the former governor procured the thugs that invaded Owerri that Monday morning.

According to him, the fact that the former governor sponsored some northern youths who called for the declaration of a state of emergency in Imo, barely hours after the attacks, made him a culprit.

He alleged that the former governor wants to get back at Governor Hope Uzodimma for insisting on the implementation of the White Paper that indicted him for looting the state and grabbing people’s lands.

The commissioner said all that happened on Monday were orchestrated to portray Uzodimma as an incompetent governor as a prelude to the declaration of a state of emergency in Imo by the Federal Government.

“Recall that the man had gone to court to stop the commissions from sitting. When that failed, he approached Governor Hope Uzodinma to disband the panels, and when that failed, he resorted to violence to repossess property government had sealed. That is the motive for the attacks,”he said.

While brandishing a copy of a press conference by the northern youths where they castigated Uzodimma, but praised the former governor, Emelumba said it was not rocket science for people to know the person behind the attacks.

He added that it was not  a coincidence that the former governor has not condemned the attacks in Owerri, insisting that he failed to do so because he  knows something about the attacks.

He said he was sure that at the end of thorough investigation, the truth would come out that the desperation of the former governor to hold on to filched Imo property has driven him to unleash violence and destabilise the state.