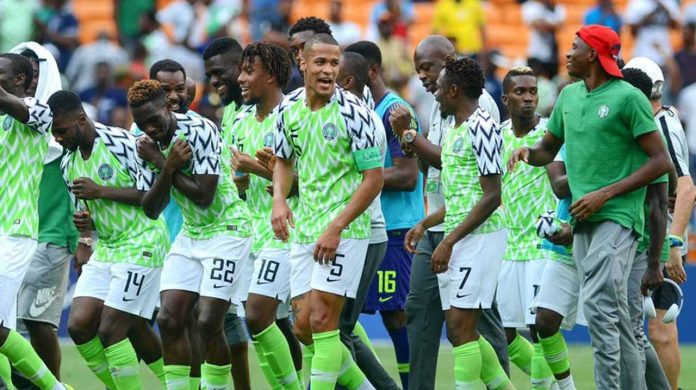 The Super Eagles of Nigeria are up to 32nd place in the new FIFA/Coca-Cola World Ranking table, up four places courtesy of their two wins over the Benin Republic and Lesotho in the last qualifying matches for the rescheduled Africa Cup of Nations Cup scheduled for Cameroon in January 2022.

The Eagles remain third in Africa, behind Senegal and Tunisia. The Teranga Lions moved two places down the FIFA ranking table from their former 20th position while Tunisia remain in 26th place, though both countries will be in Cameroon next year.

Still top of the FIFA world ranking is Belgium, followed by France and Brazil in third place. Mexico dropped out of the top 10 and was replaced by Denmark, who won all three qualifiers for Qatar 2022 and scored 14 goals in the process without conceding any.

“Consequently, in this latest edition, only two pairs of teams are tied: Cameroon and Bosnia and Herzegovina in 55th place on 1404.87 points; and Cabo Verde and the United Arab Emirates in joint 73rd on 1330.16 points.”

The most improved sides are Armenia and Guinea-Bissau. Armenia gained 40.28 points to move from 99th to 90th while Guinea-Bissau gained 11 places to stand in 108th place.