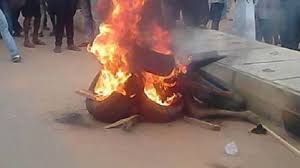 Two armed robbery suspects said to have been terrorising the Ngwa road axis of Aba, Abia State, were, yesterday, lynched.

It was gathered that the two were among a three-member armed robbery gang killed during a failed robbery operation at the Obohia area of Aba.

According to sources, the residents resorted to self-help as efforts to invite police personnel to come and pick the suspects failed.

A source, who gave her name as Amarachi, said son of a thrift owner was going to the bank to deposit money they collected for the day when the armed men attacked and collected the money from him.

Amarachi, who stated that the surviving member of the gang, on seeing that his colleagues had been apprehended, ran away with the bag containing an undisclosed amount of cash.

“It was when they collected the money that the boy raised the alarm. People who saw them collecting the bag containing undisclosed huge sum of money chased after them and, in the process, caught one of them.

“At first, they used machete on them, but the machete couldn’t penetrate their bodies. It was at that point the mob used stones and clubs to hit them and later burn them to death,” the source said.