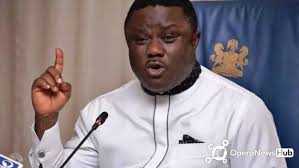 Governor of Cross River State, Ben Ayade has suspended the chairman of the Calabar Carnival Commission, Mr. Gabe Onah, from his post.
Onah’s suspension is contained in a statement signed yesterday in Calabar by the governor’s special adviser for media and publicity, Mr Christian Ita.
The governor said the suspension was effective immediately.

However, he did not specify the reason for the suspension of the chairman of the commission.

The suspension comes two days after the commission hosted its first awards night in Calabar.

A source at the governor’s office Calabar said the suspension may not be unconnected with the organisation of award night in which perceived enemies of the administration were given award by the commission. A development, which angered the governor that he, had no option than to release his sledgehammer on the commission’s chairman.

Ogah’s suspension is the third suspension made by the governor in the last one week. Barely a week ago the governor announced the suspension of one of his media aides Ursula Agbor and chairman of the state internal revenue service, Mr. Akpanke Ogar for undisclosed reasons.