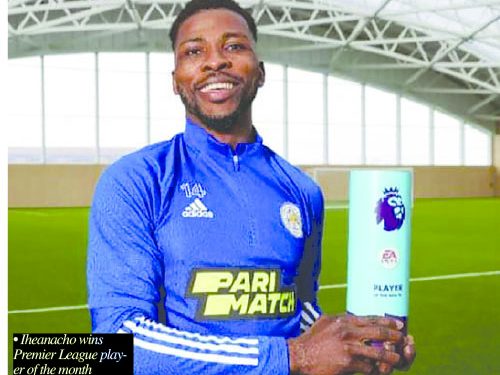 The 24-year-old scored five goals in three league appearances for the Foxes in the lead-up to the international break last month, including his first Premier League hat-trick against Sheffield United.

Iheanacho, whose partnership with Jamie Vardy came to the fore in the absence of James Maddison and Harvey Barnes, also scored league goals in the 2-1 win at Brighton and the 1-1 draw against Burnley.

In an exclusive interview with Sky Sports, Brendan Rodgers explains the tactical and psychological reasons behind Kelechi Iheanacho’s form.

Leicester, third in the table, host league leaders Manchester City, who had won both the player and manager awards for the past two months through Ilkay Gundogan and Pep Guardiola, on Saturday, live on Sky Sports.