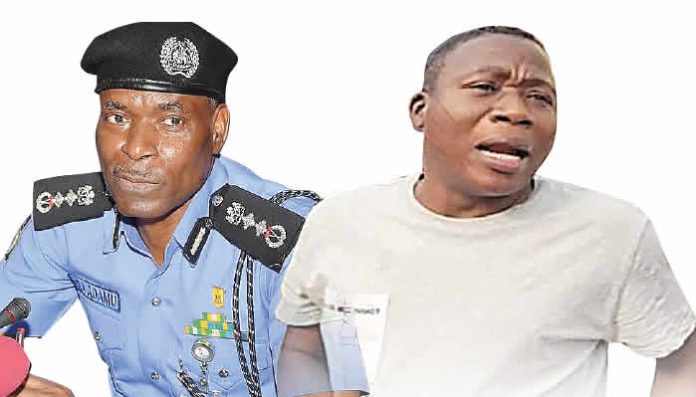 The Inspector-General of Police, Mohammed Adamu, is believed to be under serious political pressure to arrest Yoruba rights activist, Sunday Adeyemo, aka Sunday Igboho, for calling for the secession of the Yoruba from Nigeria.

It was learnt that the police may again attempt to carry out a covert operation to take Igboho into custody having failed to arrest him last month.

Findings indicate that the police authorities are in a dilemma on how to contain the activist who has been demanding the secession of the Yoruba from the country, following the failure of the Federal Government to curb the insecurity in the South-West.

Security sources said the police are being careful not to upset the delicate security situation  in the South-West, which may become aggravated if Igboho is forcefully arrested.

It was gathered, informed the decision of the police to invite Igboho.

A senior police officer, who spoke to one of our correspondents on condition of anonymity, said, “The IG has been under political pressure to arrest Igboho but some leaders from the South-West have also advised against Igboho’s arrest to avoid throwing the region into chaos. Igboho has a large following which may react violently if he is arrested. The police authorities are in a dilemma over the issue but I think the IG succumbed to pressure from government hawks who are uncomfortable with Igboho’s trenchant calls for the disintegration of the country.”

The activist had on Friday confirmed that the IG sent letters to him but his security team refused to accept the letter, citing fear for his safety.

In a statement by his media aide, Olayomi Koiki, Igboho said a letter was sent to him on Thursday via courier service while another was brought to his residence by about 15 policemen.

The statement read, “We would like to tell the international community and every Nigerian that this morning, 1st of April, 2021, a letter was sent via DHL to Chief Sunday Igboho but the letter was not received by his security team.

“Later around 3pm of the same day, a team of about six men without uniform arrived in a (Toyota) Corolla car and another nine were in police uniform but all were identified as police officers.

“They wanted to see Chief Sunday Igboho with a letter said to have been addressed to him by the Inspector-General of Police. Again, the letter was not received by Chief Sunday’s security team.

“Chief Sunday would like to know why a letter was sent to him and for what purpose. If the IG of Police wants to invite him, we would like him to first send the same letter to all the bandits and Boko Haram members killing our mothers and farmers and those kidnapping them.

“Since the IG of Police wants to invite him, he should make a public statement addressed to Chief Sunday Igboho. We should all remember how a letter was sent to the late Dele Giwa.”

Igboho became a subject of interest to government after he served a notice to quit on Fulani herdsmen in some parts of the South-West in January.

“When they noticed how tense everywhere was, they fled. They came in four Hilux vans and a Toyota Land Cruiser. There are bandits operating all over the place but people like me who are defending our fatherland are the ones you want to arrest. Why?”

On whether he would honour a police invitation if invited, Igboho said, “Go and ask them to invite Gumi and Shekau first before disturbing me. Let them face the bandits instead.”

Asked if he would go into hiding, he said, “What for? I am in the neighbourhood. I cannot run.”