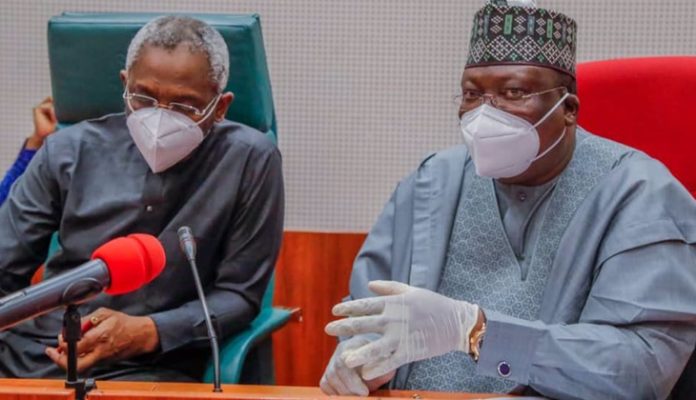 The declaration by the House of Representatives last month that the National Assembly is broke and the decision of the Senate to fault the claim is generating an interesting discourse among keen watchers of the country’s political development, SUNDAY ABORISADE and LEKE BAIYEWU write

The House of Representatives courted the wrath of Nigerians last month when it declared that the nation’s apex legislative institution was broke and demanded additional funds to enable it to carry out its functions effectively to the country.

The Senate, in what appears to be a case of damage control, following heavy backlash on the social media, denied the position of the House of Representatives, claiming that the two chambers were being adequately funded.

However, the House stood its ground and insisted that the paucity of funds had made the working environment not conducive for lawmakers while they had not been able to carry out their legislative activities to the best of their ability.

The Chairman of the House Committee on Media and Public Affairs, Benjamin Kalu, stirred the hornet nest  a few weeks ago when he declared for the umpteenth time that the National Assembly was broke.

Kalu was asked if it was true that the House reduced the number of days lawmakers sit for plenary per week – from three days to one and recently two – to cut costs. He said it was for safety reasons due to the COVID-19 pandemic.

The House’ spokesman, however, said the parliament was ‘broke’ still.

“The House is broke and is afraid of your complaints as Nigerians to make provision for what will make them run the activities of the House effectively.

“Nigerians must be made to know that the appropriation that was made for the running of the National Assembly, which happened when naira was 160 to the dollar, is less now than what it used to be.

“The dollar equivalent of naira today has gone up to over N400. The purchasing power of the budget, as it is now, is weaker than it was 10 years ago.

“The budget of the National Assembly is supposed to be reviewed, in view of its purchasing ability of the services that will help the parliament to move forward. At the moment, it is a weak budget and that is the truth.

“I have actually fought with the leadership of the House and I have asked the question, ‘Why are you afraid to raise the budget of the National Assembly that will enable us to conduct our services efficiently and effectively?’

According to Kalu, parliaments and parliamentarians in other climes spend more funds, making them perform better.

“Sometimes, people wonder if we really need those aides. How do you think we will function by making good laws? You need seasoned experts to work for you.

“If you go to America, you will see professors who are consulting and working directly with members of the parliament.

“That is why when they come out with their laws, bills and motions; they are what address the problems of the country. But can we afford that as we are? The answer is no, we cannot.

It was not the first time Kalu would lament the paucity of funds at the National Assembly.

The House’ spokesman had on February 9, 2021, said pressure being mounted by Nigerians on members of the National Assembly was “killing” them.

He had added that Nigerians did not understand the functions of a parliament, making them erroneously make demands from lawmakers and have expectations beyond their primary responsibilities.

Kalu, at a press conference, had described the National Assembly as one of the poorest, perhaps in Africa or in the world.

He said this in response to a question on whether the lawmakers had been compromised due to the failure by its various standing and ad hoc committees to turn in their reports on several probes.

He said, “As per being compromised, it is very painful that that word keeps coming out. You know that if this parliament has been compromised, you will see it. This is one of the poorest parliaments.

You don’t see them (lawmakers) living in luxury. Compromised with what? Positions or money or what?

“These guys (lawmakers) here are suffering; these guys are under stress. That is why most of the illnesses they are passing through – heart attack, this failure, that failure – are due to stress from their constituents. That is the truth and the truth must be told. Whether you try to understand it or not, let the press know this: the pressure from the constituents is killing members of the National Assembly. That is the truth.

“So, most of the members of the National Assembly are under great pressure. And the resources for them to meet these expectations from the public are not there.

“People don’t want to hear this but I must tell you the truth; that the members of the parliament are under pressure.

“I don’t care how you go and report it; it is the truth. This is the truth, you can report it however you want to. I’m telling you that members of the National Assembly don’t have the kind of money and resources you say they have. And the pain that is being inflicted on them is affecting most of them.”

Kalu, however, said, “Despite the pressure, we will continue to do our job. We must do it; that is what we signed for. As per the pressure, it is much.

“Many people misunderstand what is happening with the parliament. And some of the members who don’t know how to explain to their constituents carry this pressure with them (lawmakers), with little resources, and it weighs them down.”

He asked, “Do you know that members of the National Assembly spend their private money to take care of constituents? But the constituents feel that the money they are being given is from the Federal Government. It is coming from the representatives’ pocket and this is killing them.

“Go and ask any of the National Assembly members, from the Senate to the House, nobody is finding it easy. But we will keep pushing on because this is a national service. We are competent enough to carry the pressure and that is why we are here.”

However, the Spokesperson for the Senate, Dr Ajibola Basiru, said the National Assembly, being on first line charge, was neither broke nor experiencing cash crunch.

“The National Assembly as far as I am concerned does not owe its staff, salaries. The management does not also owe any lawmaker.

“It is totally wrong to say that the National Assembly is relying on the ministries, departments and agencies to fund its committee works. If that is the case, that will even be a conflict of interest.

“The National Assembly does not rely on the MDAs to fund our activities. We have the budget for our committees and oversight.

“Also, when there are specific needs in terms of consultancy services or special travels to do our jobs, the bureaucracy supports such assignment. It does not make sense to rely on the same MDAs.

“There is no senator or member of the House of Representatives that can come out and say he or she has not been paid.”

When our correspondent asked Basiru why he was insisting that the nation’s Parliament was not broke contrary to the position of his counterpart on the House, he said, “please direct your questions to the person who said that.”

Basiru said, “I have said it and I am repeating it again that the National Assembly is not broke and we are being funded to carry out our oversight functions and committee works.”

But the Campaign for Democracy hit hard at the National Assembly for demanding more funding.

The Secretary General of the CD, Ifeanyi Odili, said the federal Parliament offended many Nigerians when it cried out that it was broke.

He said, “It is appalling and extremely annoying for both members of the NASS to complain of the paucity of funds.  The paucity of funds, for which purpose? What are they doing at the hallowed chambers that make them to be entitled to N134bn in every fiscal year?

“I felt bad when I heard the news that members of the House of Representatives are complaining of lack of funds. If they are sharing among themselves N134bn annually and are complaining, what do they want Nigerians who are on less than a dollar per day do?

“Their complaint came at a time when Nigerians are saying they have failed the nation. In every facet of our national life, members of NASS have failed woefully.  “There is kidnapping, terrorism, and evil occurrences all over the place unchecked.

“It is an affront on Nigerians for the members of NASS to complain of funds because they are doing nothing, and are less bothered about what happens to the poor masses.

“Whereas, these guys were not unknown to Nigerians as people who truly needed fiscal and physical rehabilitation before their emergence at the NASS.

“Apart from this, because of what they call little money, N134bn annually, there is real agitation CD has embarked on concerning the money sinking down into NASS every year.

“The CD is of the opinion that the status of members of the NASS should be at the same status as that of the Permanent Secretary in the civil service.

“We are saying that their positions should be less attractive because we have so many areas we should channel our national patrimony to.

“Some of these members of NASS do not have good roads network in their respective states. Across Nigeria, there are no good roads, no sound health facility, our security agencies are poorly remunerated, hence poor policing is the result.

“Finally, their request is ill-conceived, unnecessary and uncalled for, lacking the true spirit and sense of nationalism. It portrays them as a group of squanderers, who are out to squander and loot our nation to its marrow.”.

Also, the President of Women Arise, Joe Okei-Odumakin, said the National Assembly was insensitive to the plight of suffering Nigerians by complaining about funds paucity.

Okei-Odumakin said, “The reality is that such argument emanating from the nation’s legislature at this crucial moment of national austerity is quite insensitive.

“ This is because the availability of fund or otherwise in the purse of the National Assembly, has no direct bearing as such, on the lives of the ordinary citizens.

“The  huge fund always allocated annually to our legislators, is used to service their personal needs and advance individual political fortunes.

“I strongly feel, that will be of more concern, to the average Nigerian, rather than if the National Assembly has enough money in its purse or not.”