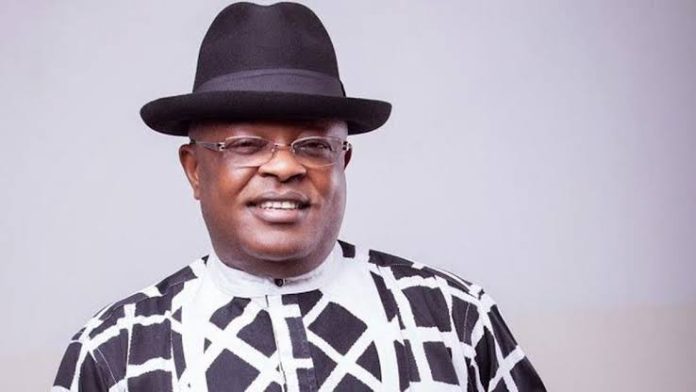 In the suit marked, HAB/36/2021, and filed before an Abakaliki High Court, Umahi and two other plaintiffs, Austin Umahi and Brass Engineering and Construction Nigeria Limited, said the paper’s ‘offending’ publications of January 29 and 30 2021, caused them ‘peculiar and special damages.’

The plaintiffs’ statement of claim named the Peoples Gazette and the author of the said defamatory reports, Nimi Princewil, as 1st and 2nd defendants, respectively.

The plaintiffs in the case filed by their lawyer, Chukwuma-Machukwu Ume (SAN), stated in their statement of claims that the sum of N2 billion being sought as damages would be donated to charity, if their suit scales through.

According to Governor Umahi, the paper’s defamatory reports were “having weighty negative effects on his political career.”

He averred that he had suffered loss of confidence among his political base, as many of his discerning political associates instantly shunned him after the publications.

The plaintiffs informed the court that they had suffered general falling-off of business, as they suffered loss of income and finances.

Sequel to the foregoing, the plaintiffs said the defendants were liable to payment of N2 billion as an atonement for bringing “shame, mockery and humiliation to the plaintiffs through the unsubstantiated publications.”

The governor and two other plaintiffs, in their reliefs, urged the Court to compel the defendants to issue a retraction of all the “disparaging publications” against them.

Other reliefs included, “An order of the court to the defendants to issue a written apology to the plaintiffs. The retraction and apology are to be aired over and or published: AIT, in two national dailies and in all the other Internet/social media network where the defamations were published.”

“A perpetual order of injunction restraining the defendants, whether by their servants, agents or otherwise from publishing or causing to be published the said or similar defamations against the plaintiffs.”

“An award of the sum of N2 million only, being the cost of the filing and the prosecution of this suit.”

Meanwhile, Justice E. A. Ngene, has granted an ex-parte application of the plaintiffs for leave of court to serve the writ of summons and other relevant processes concerning the suit on the 1st and 2nd defendants outside jurisdiction.

The case had been adjourned till May 17 2021 for pre-trial conference.