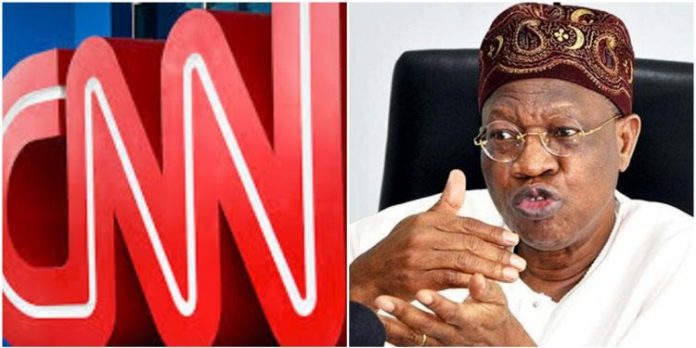 Federal government said that it will impose a fine of N100,000 each time any Nigerian brand that create their adverts abroad but broadcast them on CNN and other international stations broadcasting in Nigeria.

Lai Mohammed, minister of Information and Culture, who stated this on NTA’s ‘Good Morning Nigeria’ programme on Monday, said this was one of the rules included in the Broadcasting Code which has been rejected by many in the industry.

Mohammed, also said that measure was the only way to help the local league thrive.

He said, “Let’s assume you have brought in La Liga, and during the matches, Guinness is advertised, we will compel you, we will compel Guinness to also advertise when we are playing a local league. That is the only way we can grow this industry but as can be expected, we have had very few supporters.”

He said in the event that the brand wants to run the advert on a local station like NTA, the brand would pay a N100,000 fine each time it is broadcast.

Mohammed added that adverts promoting Nigerian brands must be directed and authored by Nigerians inside the country.

He further stated that the NBC had been asked to implement a regulation mandating exclusive licensees and broadcasters to share exclusive rights with other broadcasters.

Mohammed said this policy would ensure that Multichoice would no longer have the monopoly of broadcasting the English Premier League.

“Gulder is made, processed in Nigeria. If you go to South Africa to produce an advert which you are going to air to Nigerians because Nigerians consume Gulder, what we have amended the code to say is that for every time that advert is aired in Nigeria either on radio or television, you pay a fine of N100,000. We are not stopping you from making your production in America or South Africa but if you are going to advertise in Nigerian territory, you will pay a fine of N100,000.

Mohammed stated that if any Nigerian company invests in a foreign league, the firm must invest at least 30 per cent of that money in Nigerian football.

“We went further to say that if a company should invest $1m in bringing EPL to Nigeria, that company must also be ready to spend 30 per cent of that $1m in producing a local content along the same line.

“In other words, if Maltina or Guinness decides to bring in EPL, which is English football, we have no problem with that. But they must also invest in covering our local league to the tune of 30 per cent of what he has paid,” the minister said.

Mohammed argued that until the anti-competitive and monopolistic tendencies are expunged from the broadcast sector, Nigeria would not be able to grow local content.

“The NBC has issued about 30 pay-TV licences but only one is managing to survive. Why? Because of these anti-competitive and manipulative tendencies of these foreign companies,” he said.