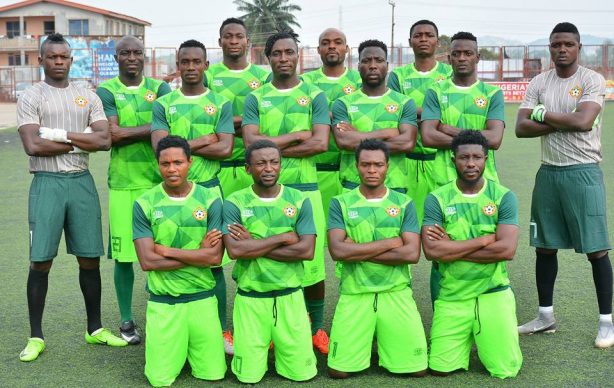 Fans of Katsina United held players and officials of Kwara United hostage for over an hour after their 2-1 home loss to the Harmony Boys in a Nigeria Professional Football League fixture played on Sunday.

The visitors had taken the lead through Afeez Nosiru in the fifth minute but were pegged back in the 30th minute courtesy of Josepe Atule’s strike.

Striker Michael Ohanu scored a 96th minute winner for the visitors to earn the league leaders maximum points from the encounter.

Immediately after the final whistle, Katsina United fans encroached on the pitch and attacked the centre referee, who was severely injured and rushed to the hospital.

In a video obtained, players of Kwara United holed up in a dark room, while another video showed two ambulances at the exit part of the stadium, with players of the home team standing by the touchline.

Kwara United General Manager, Bashir Badawir, said it took the intervention of the Nigeria Police Force before players and officials of the league leaders were safely escorted to their hotel.

“They held us hostage for over an hour, the referee was bruised and battered, we didn’t know what was going to happen,”

“It took over an hour before we were escorted out by the police, but everyone is fine, the players and officials were not injured and that is the most important thing.”

The League Management Company in January 2020 fined Katsina N3.5m over fans’ violence in a fixture against bitter rivals Kano Pillars.

In 2018, Katsina United were also fined N1m for their failure to ensure adequate security and crowd control when some of their supporters stopped the away team (Kano Pillars) from leaving the pitch and stadium.

The club in 2019 were handed a N1m fine after complaints by MFM, Kwara United, Insurance and Lobi Stars of their inability to access the stadium for pre-match training prior to their away games.

The LMC in its guidelines before the start of the season on December 27 had banned fans from being admitted into stadiums but despite reports by The PUNCH of fans attending games in recent weeks, officials have continued to pay lip service on the issue.

In other NPFL fixtures on Sunday, there were home wins for Akwa United, Rivers United, Plateau United, Kano Pillars and Warri Wolves, while Wikki Tourists played a goalless draw with Adamawa United.
PUNCH