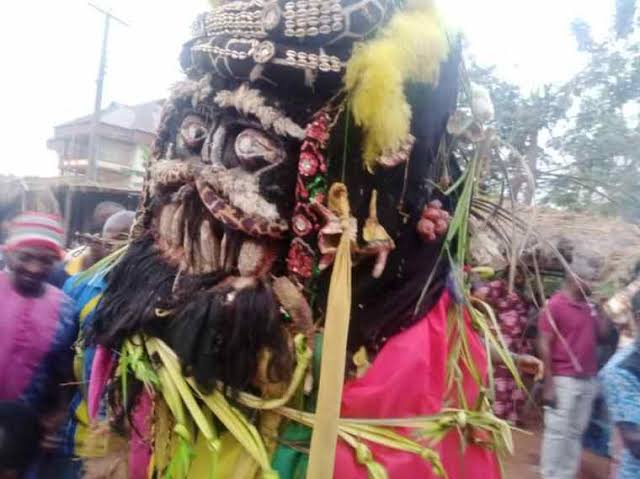 Urum is one of the food producing communities that make up Awka North local government area of Anambra state.

This explains why the Egwu ori festival which is used to thank the gods for a bumper harvest is usually a big celebration for the people of the area who troop enmass to mark it.

The four villages in the town took their turn within the five days of the festival to showcase their foods, masquerades, and able bodied youths who perform the ikpa ogbondu, that is flogging themselves beneath the belt to the admiration of the spectators.

The event which takes place in village squares presents a great African atmosphere where all the people gather with different cultural attires , dance groups, and Costumes to cheer up themselves as they get entertained.

An indigene of Ifiteorah village, Comrade Luke Oraekie, gives an insight into what the egwu ori festival means to the people of Urum.

Another youth from Akitinyi village, Comrade Chimezie Udekwe, said the festival which is as old as the community has a river that the people abhor killing any living thing inside it as the water is also used for cleansing purposes.

The Chairman of Umuife Village, Chief Jerome Nnabuchi explained that immediately after the festival, the people will commence farming activities having thanked the gods for protecting them throughout the out gone year.

The festival accommodates people from all walks of life as there were rules and regulations set by the entire community to avoid breaking of bottles, physical fighting, or bullying of strangers by anyone or masquerade.

Chief Mike Arinze from Akaeze village, also confirmed that the festival is in celebration of Ori , a deity that has existed and benefited the entire community.

Different people, both from within and outside the town took their turn to visit the Obu Ori , where they table what they want the gods to do for them and in turn get their supplications passed on by the chief priest, Ozor Mazi Festus Nwafenna Echetabu (Onyibalu).

The Chief priest, while praying for a bumper harvest both in agricultural ventures and business, said the event is also used by many to redeem their pledges to the deity.

The festival is also used by the community to confer the prestigious Igbo traditional title, Ozor on some illustrious sons who had distinguished themselves in character and deeds as confirmed by two recipients, Ozor Cosmas Obiesili (Ozor Chinaenyeeze), Ozor Nwonyibo Ndidi Aniebonam ( Ozor Oduenyi) and others.
The women folks are not also left out of the celebration as they are adorned in traditional beads, corals and attires dancing round the villages to the admiration of both old and young who spray them money, in appreciation.

Their sons and daughters travel from all parts of the world to be part of the Egwu Ori celebration which according to ITE Ego from Akaeze village who returned from Senegal remains a strong deity that protects those who are faithful to it.

Friends and tourists from neighboring communities are not left out as they troupe in within the five days of the event to get hosted in the village squares where assorted drinks, food and other local delicacies are served.

For the traditional ruler of Awba ofemili Igwe Ezekwesiri Maduagwuna, the festival which the entire Awka North Local government area takes turn to celebrate ushers in the farming season.

The Onowu of Ebenebe community Chief Joe Nwegwu commended the Willie Obiano led administration for creating the needed awareness that has rekindled the conscience of the people to take interest in culture and tradition of the Igbo race.

The member representing Nnewi North constituency in the Anambra state house of assembly, Mr Smart Okafor who was represented during the Ozor title taking, said the state ministry of Culture and Tourism has the mandate to continuously promote such traditional events across the area while urging the people to also know that they have a duty not to allow their culture go into extinction.

The people of Urum Anike, including Chief Ebenezer Nwakeze and Chief Hon. Louis Umegbolu (Chairman, Nze n’ Ozor society Urum) while dancing to the uvie cultural play, commended the President General of the Community, Chief Aloysius Chijioke Tabansi for reinvigorating the fun and peace in the festival as they looked forward to a bumper harvest and celebration of Egwu Ori 2022 in grand style.