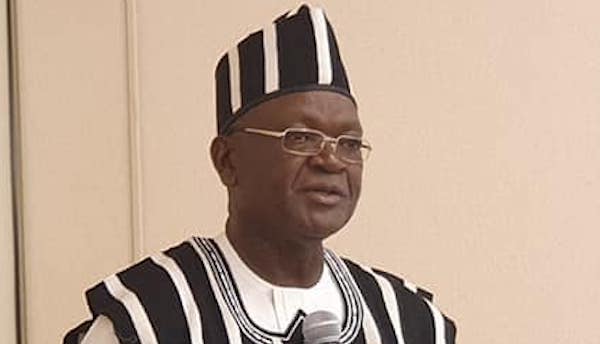 The Governor of Benue State, Samuel Ortom, on Saturday, suspended a traditional chief, Ortar Agwa Kwahar in the Buruku Local Government Area of the state, over the death of a widow.

According to a statement made available to journalists by the State Commissioner for Information, Culture and Tourism, Ngunan Adingi, the suspension was said to be because of a crisis in Mbatyough Council Ward, Mbagen in the council area, which led to a widow, Shaade Nyihemba, being set ablaze.

According to reports, the widow who was a nurse was burnt to death when some arsonists set her house on fire a few weeks ago, and her death raised suspicion among residents in the community.

Governor Ortom had held a meeting with the traditional rulers and elders from the area on Friday and directed the suspension of the traditional chief to pave the way for the investigation of his role in the crisis.

The statement read, “Governor Ortom condemned the gruesome manner that a widow, Mrs. Shaade Nyihemba was murdered by unknown criminals and ordered that full investigation be carried out by the Police and DSS to find out those behind the dastardly act for prosecution.

“The Governor directed that Zaki Ortar Agwa Mnyange Kwahar be suspended according to Section 30 of the Benue State Chieftaincy Law, to pave way for investigation into his role in the crisis at Mbatyough, Mbagen Council Ward when he should be promoting peace.”

The statement noted that the governor ordered that all youth groups in Yemakem be banned with immediate effect.

“All activities of Yamakem youth association were also suspended indefinitely,” the statement added.
Also, Ortom warned against the floating of parallel vigilante groups in the council wards and emphasised that anyone found hosting such groups would be sanctioned.

He also warned the Benue Livestock Guards to restrict their operations within the mandate of the outfit, which was to primarily prevent open grazing and rustling of animals.

He warned that any member of the Livestock Guards found operating outside the stipulated mandate would be expelled from the organisation.