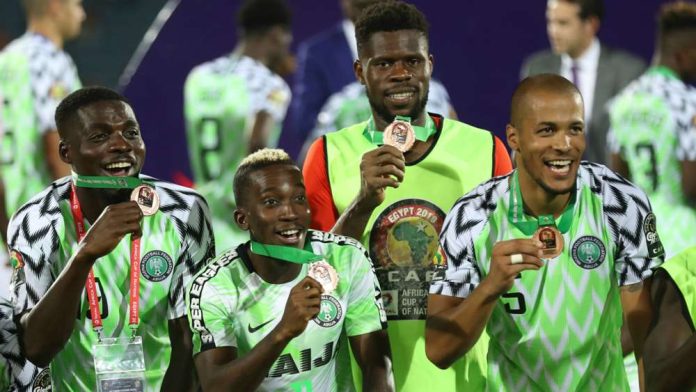 The three-time African champions have secured their place in the continental showpiece, scheduled for next year

The Nigeria national team have qualified for the 2022 Africa Cup of Nations in Cameroon after Lesotho and Sierra Leone played out a 0-0 draw on Saturday.

The Super Eagles have eight points from four games, the Republic of Benin have seven points while the Leone Stars and the Crocodiles have four and three points, respectively, from five games.

The three-time African champions are set to face the Squirrels at Stade Charles de Gaulle, Porto Novo and will now aim to retain the top spot in Group L.

Nigeria started the Afcon qualifiers on a flying note, securing a 2-1 victory over Benin at Godswill Akpabio International Stadium Uyo.

The West African giants continued their impressive start to the campaign, securing a 4-2 win over Lesotho at Setsoto Stadium.

Osimhen got a brace in the encounter while goals from Everton star Alex Iwobi and Villarreal winger Samuel Chukwueze completed the rout.

The Super Eagles then fluttered against lowly-rated Sierra Leone in their first meeting, squandering a 4-0 lead to draw 4-4 in Benin City, much to the displeasure of their fans.

Their second meeting with the Leone Stars in Freetown ended 0-0 and despite the back-to-back draw, the three-time African champions retained their top spot in Group L.

Nigeria have now qualified for their 19th appearance in the continental showpiece with two games on hand.

After their encounter with Benin, the Super Eagles will then square off against Lesotho in their final Africa Cup of Nations qualifying game at Teslim Balogun Stadium in Lagos.

The Super Eagles finished third at the last edition of the continental tournament in Egypt, behind winners Algeria and Senegal.

Their best performances at the biennial competition were in 1980, 1994 and 2013, where they won the highly coveted trophy.

The West African side remain the team with the most bronze medal at the tournament, winning it eight times.

They will hope to clinch their fourth title at the 2022 edition of the Africa Cup of Nations in Cameroon.