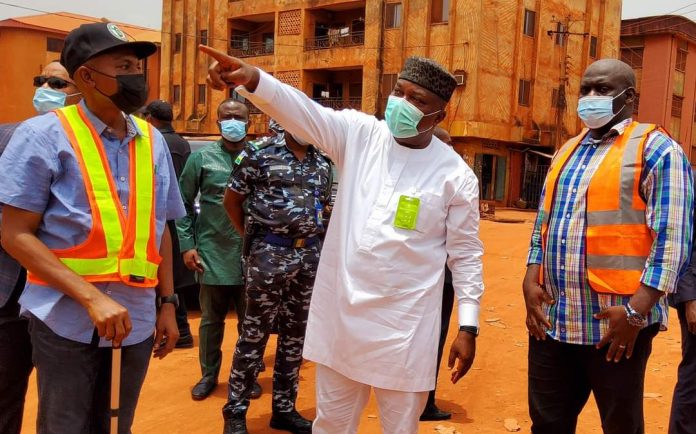 The Enugu State Commissioner for Works and Infrastructure, Engr. Greg Nnaji, on Friday, disclosed that Governor Ifeanyi Ugwuanyi has directed his ministry to commence immediate procurement for the reconstruction and rehabilitation of Etudo/Awkunanaw Street, Achara Layout, Enugu South Local Government Area, as one of the special intervention projects for urgent attention, in the 2021 budget deliverables.

Engr. Nnaji gave the hint shortly after Gov. Ugwuanyi paid an unscheduled visit to the site to ascertain the true state of the road for immediate intervention.

The Works Commissioner, accompanied by the Deputy Leader of the Enugu State House of Assembly and member representing Enugu South (Rural) Constituency, and the Special Adviser to the Governor on Information, Barr. Steve Oruruo, explained that the governor’s visit was one of his inspection tours of projects sites to ensure that the deliverables in the 2021 budget are met.

Engr. Nnaji recalled that the governor, a few days ago, was at the Nike T-Junction in Enugu East LGA, to inspect progress of work at the ongoing construction of the flyover bridge project, which was also captured in the 2021 budget to permanently address the perennial gridlock in the area.

He maintained that “Etudo/Awkunanaw axis is part of that provision among other roads in Enugu urban that are slated for immediate rehabilitation and reconstruction”, stressing that “his (Ugwuanyi’s) visit here came with a complete directive to carry on with the immediate procurement for the reconstruction of this area”.

On road maintenance, the Works Commissioner revealed that the state government has commenced the bi-annual repairs of roads that are in bad shape in the state, in line with its zero tolerance for potholes.

His words: “For the past two weeks, a team of engineers divided into seven groups, have been on the ground rehabilitating, repairing and making sure that we have roads that are good for passages.

“If you go round the streets, from Achara Layout, Trans Ekulu, Ogui Road, New Market, among others, they are all being repaired; like we keep saying, it is a continuous exercise to repair our roads”.

In his remarks, Barr. Oruruo explained that the governor’s visit to Etudo/Akwunanaw Street was in furtherance of good governance in Enugu State and his sustained zeal and dexterity to ensure that he mobilizes the energy required to rehabilitate the road.

The Special Adviser who expressed the state government’s concern over the level of dirt in the area that causes blockage in the drains and waterways, said that “this place needs to be cleaned up and the Commissioner (Works) has taken it upon himself to make sure that we do not have blockage of any kind” to ensure longevity of the road after its rehabilitation.

He advised residents of the area to desist from dumping refuse on the waterways for them to benefit from the various interventions of state government that are ongoing across the state.

Also speaking, the Deputy Leader of the House of Assembly, Rt. Hon. Mrs. Ugwu, thanked Gov. Ugwuanyi for his humility, accessibility and utmost concern for the wellbeing of the people.

The lawmaker equally commended the governor’s consistency and steadfastness in visiting sites across the state to ascertain their state for proper assessment and effective service delivery.