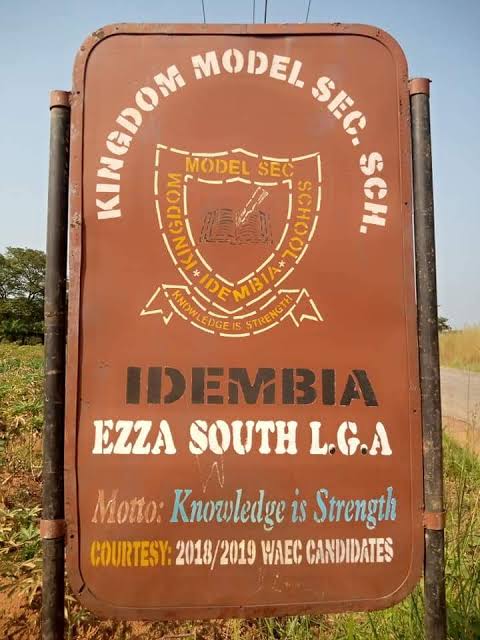 The Proprietor, management and teachers of Kingdom Model Secondary School Idembia, Ezza South LGA, Ebonyi State, have rendered unreserved apology to the State Governor, Chief David Umahi for the media attacks against the Governor following the closure of the school over an allegation that its premises were used as hideout for cultists.

In an apology letter signed by the Proprietor, Barr Friday Agbom; the Principal, Mr. Nwafor Uchenna; the Dean of Studies, Mr. Ovukwa Paul; the Vice Principal, Mr. Igwe Chinedu; and the Senior Prefect, Comrade Igwe Collins, which was made available to Everyday News, Thursday, the school noted that the media attacks on the sacred image, office and person of Governor Umahi, was done in error.

Recall that the Ebonyi State government had December last year, sealed Kingdom Model Secondary School, over allegation that its premises were being used as hideout for cultists and for cult related activities.

The school Proprietor, Barr Agbom, who is the Chairman of the Peoples Democratic Party (PDP) in Ezza South LGA, had in several media publications accused Governor Umahi of sealing his school because he refused to defect with him to the All progressives Congress (APC). An allegation the Governor denied.

The school management added that “it recently discovered that the closure was initiated and championed by persons who were against our progress just to enable them destroy our business knowing the weighty nature of the said allegation and charged Political tension in the state within the period.”

“We humbly wish to withdraw all defamatory publications made against our dear Governor by us or in our name (directly or indirectly) most especially the allegation that His Excellency, Chief Engr. Nweze Umahi closed down our school, Kingdom Model Secondary School, Idembia on the ground that Barr. Agbom Friday who is the school proprietor and PDP Chairman Ezza South LGA refused to join APC and inform the general public to disregard same as such were done in error.”

“We feel that it will be a sin on our side to discover such facts and fail to apologise publicly to His Excellency, our Dear Governor for such attacks. He actually doesn’t deserve it haven known the truth.

“We sincerely apologise to His Excellency for sparking off such media attack on him. We pray that he forgives our ignorance as a father. It wasn’t intentional. We are very sorry.

“We further apologise to all our leaders in the state, both PDP and APC who were equally attacked or offended during the period .

“By way of clarity, we wish to state here that the allegation/ report against us was totally false, as same was made in bad faith, with the aim of defaming our characters before the Governor and destroying our business.

“We pray His Excellency, the Governor of Ebonyi State to forgive us as his children and passionately appeal that he reopen our school so that the innocent Ebonyi children who are schooling in the school would join their counterpart in the current academic year.

“We assure Your Excellency that if our apology/ appeal is accepted, we shall continue to align ourselves with the government policies on education and security as law abiding citizens and shall intensify our efforts on the fight against cultism and other related offences, as we have always done”, the apology letter, reads in part. END