Over 5000 PDP Members Defects To APC In Ebonyi 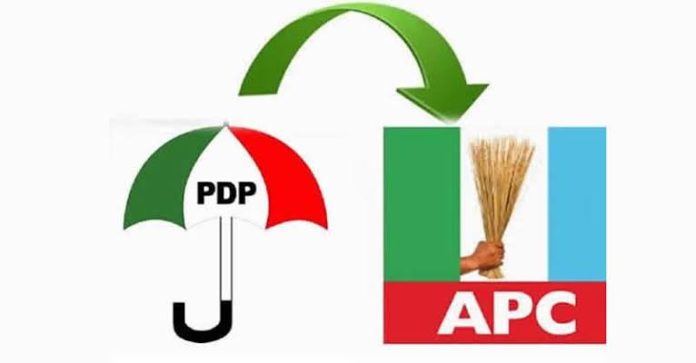 No fewer than five thousand (5,000) members of the People’s Democratic Party PDP in Okue Ward, Ishiagu, Ivo Local Government Area of Ebonyi State at the weekend defected to the All Progressives Congress APC.

The defectors were recieved by the APC leader in Ivo LGA, Chief James Aro Nweke alongside Hon. Onyebuchi Ogbadu, the Local government Chairman, Engr Ogbonnia Obasi Abara, Commissioner for works and Transport among others.

Recieving the defectors, the leader of APC in Ivo, Chief Aroh Nweke, thanked the good people of Okue ward for joining the APC adding that since the defection of the Governor to the APC, Ebonyi has been integrated into the national politics with the benefits.

He noted that under President Muhammadu Buhari, the South East has witnessed infrastructural development and Human empowerment and called on the opposition party in the state to stop deceiving the unsuspecting members of the public who they are unwilling to better their lots.

“Our people can no longer be deceived by the opposition. In Ivo Local government area today, the people are happy because the President encourages the Governors to perform unlike before that you cant boast of any meaningful projects. Federal projects embarked upon by state Governors are repaid unlike what was witnessed under the PDP”.

“Before now, ICDU election used to be a warfare because of the interest of some persons but today we can conduct our ICDU election without rancour. Owing to the fact that those perpetrating crisis during the election are now on the other side”.

He warned against any illegal gathering aimed at instigating crisis in the LGA and assured the defectors of level playing ground in the affairs of the party.

He however encouraged the people to continue to support the administration of Chief David Umahi to deliver more dividends of Democracy in the area.

The Coordinator of Echiele Development Center, Mr Donatus Umeh and his Ivo counterpart, Mr Uchechukwu Afudike thanked the people of Okue ward for coming out en mass to to identify with the progressives party.

They insisted that with the mass defection in the different parts of the State, the Progressives party will win all the elective positions in the state and retain the Presidency adding that in 2023, performance, accountability and intergrity would determine the votes of the electorates. Ends.