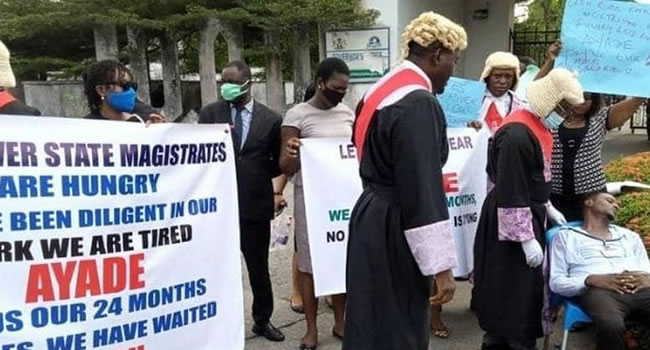 Magistrates in Cross River State have resumed a protest over their unpaid 26 months salaries and allowances.

The aggrieved magistrates, who occupied Governor Ben Ayade’s office on Monday, carried several placards highlighting their plights and begged the governor to come to their aid as they were going through serious hardship.

The inscriptions on some of the placards read: “29 esquires are in penury; pay us our 26 months salaries,” and “Ayade stop oppressing Cross River Judiciary, pay us our salaries.”

The magistrates had on January 8 occupied the Government House in Calabar to protest their unpaid salaries but were persuaded to call off the protest after a dialogue with the state government.

The leaders of the protesting magistrates, Solomon Abuo, a Chief Magistrate with the Cross River Judiciary, said they suspended the first protest in January to give room for the government to start work immediately on the demand.

He said the governor called them to a meeting and formed a committee headed by the Deputy Governor to look into the issues and make recommendations.

The magistrate said: “That meeting took place on January 19. We waited till the end of January and nothing happened, so, we went to the Deputy Governor and he told us that they couldn’t conclude their work within one week.

“He told us that it won’t be possible for us to receive January salaries but that we will start receiving our salaries from February because by then, they would be done with their report.

“Even when Olumide Apata, the President of the Nigerian Bar Association came down to Calabar and had a meeting with the state government and proffered suggestions on how the issue could be resolved, nothing was done.

“Recently, we learnt that the committee had completed its work and sent its recommendations to the governor and he has refused to act on it.

“We have given the governor enough time and made some concessions which are four possible options on how to add us to the payroll system and pay us but nothing is being done.”