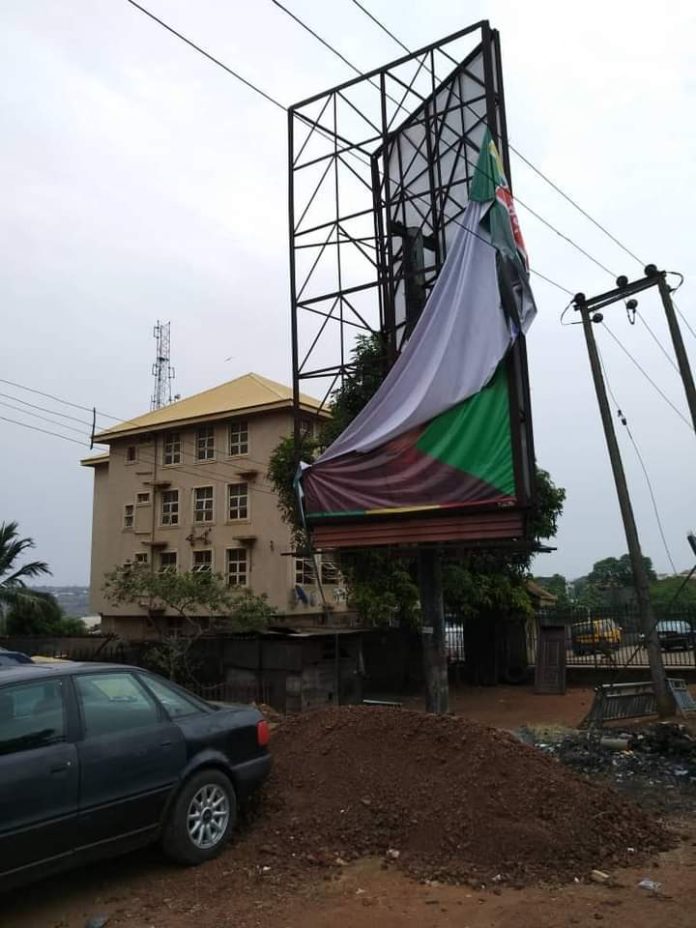 Ahead of the governorship elections slated for November in Anambra State there is palpable tension as Anambra Youths accuse agents of the state government acting on the instructions of Governor Willie Obiano of the destruction of billboards of frontline governorship Candidate of the Young Progressives Party (YPP) Senator Patrick Ifeanyi Ubah.

This is as Anambra youths have risen in anger accusing Obiano of being behind the destruction of Senator Ubah’s billboards noting that this has shown that the governor and his party the All Progressives Grand Alliance (APGA) are already jittery over Ubah’s towering achievements.

Reports from Ubah’s camp claims that it was reliably informed early Sunday morning that Governor Obiano had ordered thugs accompanied by officials of Anambra Signage agency(ANSAA) to destroy billboards erected by Distinguished Senator Dr Patrick Ifeanyi Ubah in several parts of the State.

Ubah’s Head Of Media Chuks Ogbonna who signed the statement said “this is a very worrisome development, coming on the heels of security challenges being faced by the state, whereby unknown bandits are killing security personnels at check points and carting away their arms, which are clear signs of an emperor.

As at the time of this report, 12 bill boards which have been fully paid for, and erected in several locations across the state have allegedly been pulled down, “on the orders of an obviously jittery state Government, that has failed in it’s duty and social contract to Ndi Anambra.

“They include 3 Faces at old Nkpor Junction, 1 Face at Savoil, Zik’s Round About, Onitsha, 2 Faces at Aroma, opposite Library, 2 Faces at Police headquarters Awka, 2 Faces at Immigration junction, Awka, and 2 Faces at Uga junction, Pedestrian cross.

“It is instructive to note that before embarking on the mounting of those billboards , we approached the Managing Director of Anambra State Signage and Advertisement Agency (ANSAA), Chief Jude Emecheta who personally gave us the breakdown of the bills to be paid and all these monies were fully paid and receipts issued.(Receipts attached).

‘The question then becomes, why is Gov Obiano afraid of the Distingushed Senator Dr Patrick Ifeanyi Ubah, to the extent that he always singles him out for unprovoked attacks ?

“One may recall, that a similar incident transpired when the Senator moved to carry out road interventions in his senatorial district, in order to ease the free flow of movements durng the yuletide period. It took the intervention of the necessary federal government agencies as well as good spirited youths who came out and stood guard, as the contractors worked, for the state govt actors to beat a hasty retreat.

“Let it be on record that the state government by this act is introducing bitter politics into Anambra State, and all well meaning Stakeholders of the state must rise up and take a stand against this.

“Let it also be sounded as a note of warning that we may not be able to stop our teeming supporters from tearing down any signposts erected in place of the ones that we paid for, which are now being pulled down .The State Government should be held fully responsible for any breakdown of law and order that this irresponsible act triggers in the State.

“I challenge Mr. Jude Emecheta to explain to Ndi Anambra the rationale behind his dubious act of collecting levies accruing to almost ten million Naira, meant as taxes for the erection of those billboards and in a sudden volte face, ordered their dismantling, allegedly based on threats from the State Governor.

“The posers that Mr Emecheta needs to answer Ndi Anambra are as follows :

‘Is there no longer honour in public office ?

“Is it not better that you resign as you were allegedly asked to, rather than be made the subject of laughing stock in the entire state as is going on now?

“Why did the state Government not buy up every advertising space prior to now rather than this ignoble act ?

“Why did ANSAA collect payments for the erection of those bill boards and issue out receipts since it is their intention to destroy them later ? Which responsible Government agency does that ?

“Why is it that of all the billboards showcasing the various aspirants of different political parties currently adorning the various areas in the State, it is only that of the Distingushed Senator Dr Patrick Ifeanyi Ubah, that threatens them to the extent of committing these ignominious acts ?

“I want to use this medium to call on the security agencies to take note of the current happening in the state so as to properly situate any untoward outcome that falls out from it .

“The Distingushed Senator is a peace loving man who has never engaged the Governor in any conflict and enjoys massive goodwill in the State . Unfortunately the Governor Obiano led APGA Govt has from time to time exhibited signs of the anxiety and trepidation, that he feels at the meteoric rise of the Senator’s profile in the State. They forget that power belongs to God, and no amount of intimidation can stop one whose hour, God has anointed .

“We demand that the State Governor reverse this irresponsible order to avert a possible breakdown of law and order as Ndi Anambra are not known for playing politics of bitterness.”

Reacting to the development Senator Ubah urged his supporters to remain calm and desist from taking the laws into their hands noting that efforts are on to get to the bottom of the matter.

According to him “I use this medium to call on our teeming supporters to desist from taking laws into their hands while we watch further developments, and explore lawful options available to us to correct this obvious anomaly.