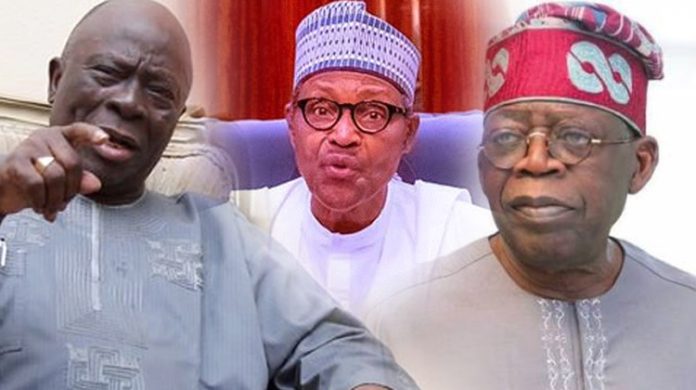 He said this in an exclusive interview with SUNDAY PUNCH, noting that Buhari and Tinubu are deceiving themselves.

Adebanjo also tackled Tinubu, Vice President Yemi Osinbajo, and APC governors in the South-West for being silent on the restructuring of the country.

He said, “The exception is the Governor of Oyo State, Seyi (Makinde). They are all under the canopy of Tinubu, who himself is under the canopy of (the President, Major General Muhammadu) Buhari. But they are deceiving themselves that Buhari would hand over to him (Tinubu) since they supported him (Buhari).

“I have said it openly before and I would say it again that Buhari is deceiving Tinubu and Tinubu is deceiving Buhari. I’m an old man and I’m a funeral candidate already, so quote me. If Tinubu contests the primary in APC today, he will fail.

“When I say Buhari is fake and he has a private agenda, I know what I’m saying. He wants Fulani to take over and that was why he allowed them to come in. When we ask them about the herders killing people, they would say they are foreigners.”

The Afenifere leader asked Tinubu and others to retrace their steps and support the restructuring agenda of the Yoruba group.

Adebanjo added, “All of them were Afenifere before they broke away. It was on the Afenifere platform that Bola Tinubu, Bisi Akande, and the others were elected as governors.

“I have always told them, from Tinubu downwards, that it’s better they save themselves speedily. I’m talking to all of them, that in the interest of Yorubaland and the country, they should get out of the carcass they call APC. I made a public pronouncement that they were a conglomeration of incompatibles. It’s on record. I said it then and I’m still saying it now; if they don’t save themselves early enough, then they are ready for a disaster.”