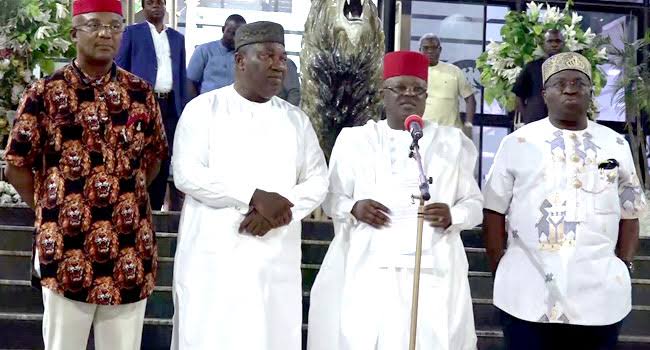 The South East Governors have been urged to wake up from slumber and offer the people of the zone good governance and credible leadership.

The Ndigbo Unity Forum (NUF), which made the call after their emergency national executive meeting in Enugu, Enugu State, said for long the givernors of the zone have taken the people for granted in providing basic infrastructures and offering of good leadership.

The president of the group, Dede Uzor A Uzor, and his General Secretary Mazi Udemadu Frank Udemadu who address the newsmen after the meeting decried the timidity and naivety of the Governors of the zone to the extent that they could not take a common stand in vital issues affecting their people especially the ravaging Fulani herdsmen.

They said it is only in the South East that their Governors invite the soldiers to kill their citizens to please their oligargic political masters especially the recent Army operation in Orlu and Ihiala both in Anambra and Imo States respectively ,warning that be such naive leadership should stop with immeditiatel effect.

The group challenged the South East Governors to begin massive construction of roads in their respective States , noting that of all the needed basic infrastructures like road is the most critical in providing access and opportunity for the citizens.

“So, now we are in dry season, they should embark on aggressive construction and reconstruction of roads in their respective States before the rain begins” said NUF.

The group also said that the Governors should not stop at road rehabilitation but should extend the development of the zone to provision of portable drinking water in every Local Government and communities in their respective States.

The group continued : Each of the Governors in the zone should provide at least 400km of roads to their people in this 2021, employ at least 500 youths in each of the Local Government Areas with its attendant monthly salary of N50.000 each in their States and other amenities in this 2021″.

NUF urged the governors to spare their citizens complaints of pauncity of fund, stressing that any South East Governor who felt that there is no money to provide these infrastructures and that their people are unnecessarily unreasonable in their demand should tender their resignation with immediate effect.

“Time has come when the people of the zone should become politically conscious to interrogate and demand accountability from their their political leaders” they said.

NUF said that the current South East Governors are rated low when compared with their counterparts in other parts of the country and their predecessors in the zone.

“They lack confidence to defend the interest of their people. Most of them are stooges to the oligarchy and agents of Aso Rock which negates the interest of Ndigbo” NUF Warned.
8th March 2021.